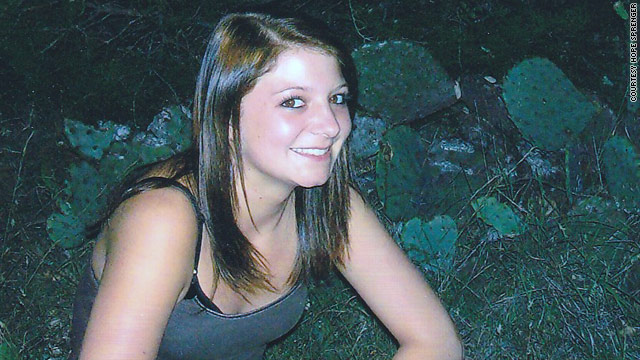 Kayla Berg was last seen on August 11, 2009, at a McDonald's in Antigo, Wisconsin.
STORY HIGHLIGHTS

New York (CNN) -- Kayla Berg was thrilled to return last August to Antigo, Wisconsin, where she looked forward to competing on the high school gymnastics team.

Her mother, Hope Sprenger, said she agreed to move Kayla, 15, and her older brother, Jimmy, back to the small town where they were raised. They had moved three months earlier to Texas, but Kayla and her brother were homesick.

"We were going to try and start a new life," Sprenger said, "but Kayla missed her friends. She was very upset that they didn't have gymnastics team at the high school in Texas."

The return home also meant Kayla and her brother would spend time with their father and grandparents, who lived five miles away.

"We left it pretty open," Sprenger said about the living arrangement that allowed Kayla and Jimmy to stay with either parent. "They could ride bikes, or we'd take them back and forth." Sometimes Kayla walked, or ran, between her parent's homes to get in shape for gymnastics.

A few weeks were left of summer break, and Kayla was making it a point to catch up with friends. With her 16th birthday still a couple of weeks away and no driver's license, she accepted a ride to the Antigo McDonald's, where her best friend worked.

"She had called me that afternoon, on August 11, around 1 or 2 and said she was going to hang around at her dad's," Sprenger said. "She said, 'I love you,' and I said, 'Love you back.' " Mother and daughter agreed to talk later. They never did.

"All I know is something's wrong," Sprenger said, adding that she's 100 percent certain Kayla would never run away.

Sprenger and police have spent the past 10 months retracing Kayla's movements on the night of August 11.

One of her brother's friends picked Kayla up at her father's house at about 8:30 p.m. The two arrived at McDonald's half an hour later. Kayla ran inside, talked briefly with her friend, and then left. She had told her friend she planned to ride around in the car for a while.

"The last we pretty much know about the story we have, is around 10 p.m.," said Antigo Police Chief Eric Roller. "The male says he dropped her off ... at her boyfriend's house in Wausau." Wausau is 34 miles from Antigo.

Sprenger didn't approve of the boyfriend. "I didn't feel comfortable that he was 19 she was 15," she said.

The brother's friend said he last saw Kayla when she got out of his vehicle and walked toward a house she said was that of her boyfriend.

"He figured it was about 10 p.m. when he dropped her off. ... He said it was dark." Roller said. The friend accurately described the house, which is in downtown Wausau and surrounded by other homes and businesses.

Investigators and Kayla's mother question why Kayla would have requested a ride to that house. It had been condemned by the health department weeks earlier and was undergoing renovations. Kayla's mother said Kayla knew no one had been living there.

Roller said he has heard conflicting stories about whether Kayla knew the property had been condemned.

No one else saw Kayla get out of the car, Roller said, but investigators were able to confirm that the 24-year old driver returned at midnight to his parents' house in Deerbrook, about 45 minutes away.

"It was such a messed-up situation as to why this wasn't reported immediately," she said. "There was miscommunication between me and her dad. I thought she was at her dad's. ... Her brother said she was over at her friend's house."

Kayla didn't have a cell phone or computer, so her whereabouts could not be tracked. Although she did have a Facebook account ,she hadn't accessed it in months.

"It's not been a lot to go on," Roller said. "There's been quite a bit of searching around that area. There's some water in the area. There have been dives."

Cadaver dogs turned up no trail and no scent of Kayla at or near the boyfriend's home. The car she was riding in was seized and processed for evidence. Police still have the car, but investigators will not comment on the evidence collected.

Roller said the biggest problem with the case is that police received information a week after Kayla went missing. He said her friends were uncooperative with police, making it appear as if they might be helping Kayla hide.

"A lot was probably gut reaction on us, thinking that if something drastic had happened, the friends would be a little more concerned," he said. "But 10 months is a long time for someone to be gone."

The case is further complicated by differing descriptions of what Kayla was wearing on the last night she was seen. Some say she was wearing jeans, a tank top and flip flops. But the driver says she wore a long-sleeved shirt, Roller said.

Kayla's mother reached out to the driver who gave her daughter a ride. She says she received two text messages from him.

Since then, Sprenger said, most of her contact has been with the driver's attorney or his parents.

"Once he got a lawyer involved, no one could talk to him," Roller said.

The driver's attorney did not return CNN's calls seeking comment.