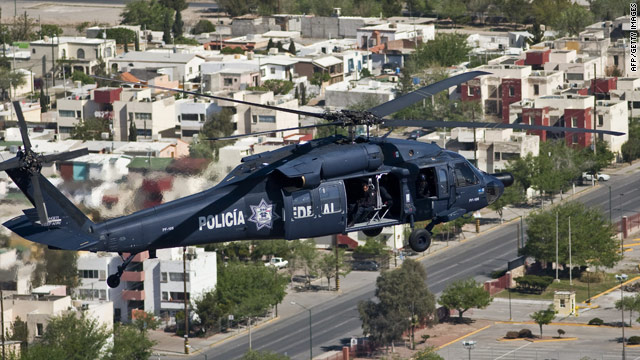 More than 5,000 people have been killed in Ciudad Juarez, Mexico, since the drug turf wars began.
STORY HIGHLIGHTS
RELATED TOPICS

Local reports said some of the suspected traffickers were carrying grenades. The gunfire could be heard by residents across the border in El Paso, Texas, local observers said.

There was no information on whether any civilians were injured in the gun battle, but Salinas said the three dead gunmen, who authorities linked to a cartel, were the only fatalities.

There had been relative calm in the city since elections were held in Juarez on July 4.

But Sunday's attack against Mexican federal police marks the third major incident of its kind in recent weeks.

On June 29 a shooting between suspected drug traffickers and Mexican federal police left one officer dead. The shooting was also seen as a watershed moment in the ongoing border drug war -- several bullets from that gunfight strayed crossed the border into Texas, hitting the El Paso City Hall. There were no injuries reported on the U.S. side.

On April 24, six federal police officers were killed in a daylight shooting in Juarez. Hours after the attack, a painted message found in the city allegedly from members of "La Linea" claimed responsibility for the attack. La Linea is an extension of the Juarez cartel, made up in-part of former Juarez police officers, according to authorities.

Assaults against federal police have increased in recent months since they took full control of security in the city from the Mexican military on April 9.

"There have been at least a dozen, maybe 15 attacks against the federal police since we took over [security]," Salinas said.

The Juarez cartel and the Sinaloa cartel have been in a bloody turf war since 2008. More than 5,000 people have been killed due to drug related violence in Juarez during the turf war, according to local authorities.