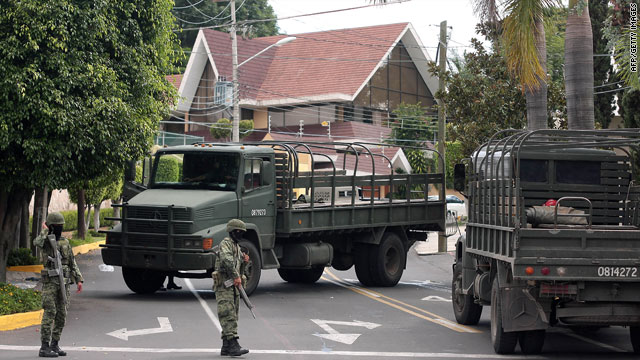 Military intelligence located Coronel in the city of Guadalajara, Jalisco state, Brig. Gen. Edgar Luis Villegas told reporters. During the operation Thursday, Coronel tried to avoid arrest, firing on the military personnel, killing one and wounding another before he himself was killed, Villegas said.

The operation resulted in the arrest of Coronel's right-hand man, Iran Francisco Quinonez Gastelum. Coronel had used two houses located in the Guadalajara neighborhood of Colinas de San Javier as "safe houses" and had not associated with anyone but Quinonez "to maintain his low profile and not draw attention," Villegas said.

Coronel, who was from the state of Durango, had gotten his start in criminal activity working for Amado Carrillo Fuentes, who was responsible for sending drugs from Central and South America to the U.S. market, Villegas said.

After Carrillo died, Coronel joined the Guzman Loera drug trafficking group, rising in a short time to become one of its principal leaders next to Joaquin Guzman Loera, aka "El Chapo Guzman," and Ismael Zambada Garcia, aka "El Mayo Zambada," Villegas said.

Coronel led the organization's criminal activity in the west, including the states of Jalisco, Colima, Nayarit and part of Michoacan, "controlling the cocaine traffic through the "Pacific Route," Villegas said.

The U.S. State Department and the FBI were offering $5 million for information leading to Coronel's capture, he said.

In addition to eliminating a major drug trafficker, the raid could also dampen criticism against the federal government that it favors the Sinaloa cartel compared to other drug trafficking organizations it is fighting.

"Although the Ignacio Coronel Villareal Mexican Drug Trafficking Organization is based in Mexico, the scope of its influence and operations penetrate throughout the United States, Mexico, and several other European, Central American and South American countries," according to the FBI, which lists Coronel among its most wanted.

Thursday's action was the strongest blow against the Mexican drug cartels since the December 2009 killing of Arturo Beltran Leyva in Cuernavaca. Beltran Leyva also was killed in a military raid.

The Mexican federal government said in April that 22,700 people have died in the country since President Felipe Calderon declared war on the cartels shortly after taking office in December 2006.