Panama cops: Americans would befriend victims, then rob and kill 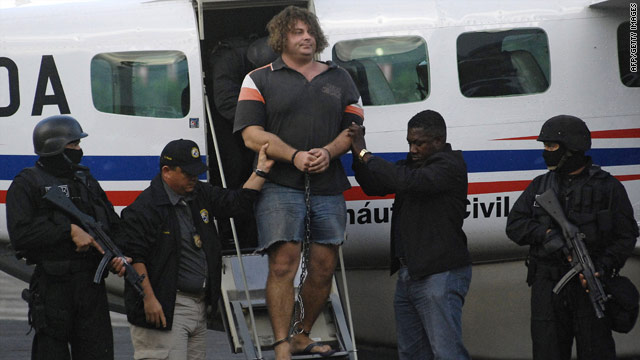 (CNN) -- Panamanian officials have unearthed three bodies linked to the five slayings an American man has confessed to committing, the lead prosecutor in the case told CNN.

William Dathan Holbert, 30, and his 27-year-old girlfriend have been arrested in the slayings. Panamanian authorities say the couple would befriend residents in the Bocas del Toro tourist area of Panama and steal property from them, even killing the victims if necessary.

"He has confessed," Calderon told CNN in a telephone interview. "The main thing is that he said that once he contacted them, he would study them and would determine what class of people they were in the sense of having money, property. He would become their friend, learning very personal details.

"Later, he would eliminate them and keep their property."

The three bodies found Tuesday are believe to be a family -- mother, father and a 14- to 17-year-old son, Calderon said.

Holbert was using a false name and initially was identified as William Adolfo Cortez when he and girlfriend Laura Michelle Reese were arrested in Nicaragua last week.

He has been charged with five homicide counts. Panama does not have a death penalty but Holbert could be sentenced to 50 years in prison, Calderon said.

"The charges are concrete and precise," Calderon said. "There is real evidence that we presented, and because of that he decided to cooperate because under Panamanian law that could result in a sentence reduction."

Officials were investigating Holbert in connection with the disappearance of five Panamanians but have ruled out his involvement in three of the cases, Calderon said. Two of the missing-person cases are still under investigation, he said.

Holbert was supposed to undergo a psychiatric evaluation Tuesday but he refused to do so, Calderon said, adding that he did not know the reason.

A trial is still months away, the prosecutor said. Holbert could be tried by a jury or a judge and the proceeding could take nine months to a year, said Calderon.

The pair was arrested July 26 in Nicaragua after an international hunt. They had been on the run since the body of Cher Hughes, a native of suburban St. Louis, Missouri, was found the previous week on Holbert's property in Panama.

The couple fled Panama northward through Costa Rica and were caught as they crossed the San Juan River, the boundary between Nicaragua and Costa Rica, said Jorge Chavarria, the Costa Rican vice minister of public security.

Holbert and Reese had boarded a boat and thrown the pilot overboard, commandeering the vessel, Chavarria said. The Nicaraguan army stopped them as they tried to enter the country.

The pair was held in Nicaragua until July 28, when Panama issued an arrest warrant and they were turned over to authorities in that country. Panama sent a government airplane to pick up the suspects, Calderon said.

Holbert has asked the U.S. government for help with his legal situation, the prosecutor said. U.S. embassies abroad can offer information and general help but cannot represent citizens in legal matters. He is being represented by a public defender, Calderon said.

Hughes, who was in her early 50s, was found in a shallow grave. A second body -- which has not yet been officially identified -- was found near Hughes.

Hughes had lived in St. Petersburg, Florida, where she owned a neon sign business, before moving to Panama.

Calderon stressed Tuesday that Panama is a safe country.

"What we want as a country," he said, "is that no one believes that Panama is being used ... by delinquents. We don't want the world to think we are a sanctuary for delinquents."