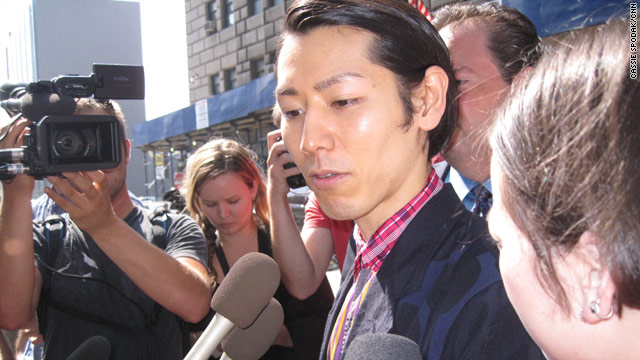 Takeru Kobayashi was charged with resisting arrest, trespassing, obstruction of governmental administration and disorderly conduct in connection with a disturbance at a famous July 4 hot dog eating contest on Coney Island.

A Brooklyn judge Thursday put Kobayashi on probation for six months. If he meets the conditions, the charges against him will be dismissed.

"I am very happy," Kobayashi said afterward through a translator. "It was a more nervous victory than winning the eating contest."

Kobayashi rushed the stage at the annual Nathan's Hot Dog Eating Contest. He had been barred from the competition this year because of a contract dispute with the event's organizer, Major League Eating.

"I went as a spectator to cheer on my friends, and everyone was yelling 'Let him eat,' so I was hoping they would let me eat and prove I am still the champ," he told reporters afterward.

In a statement released after the event, the organizer criticized Kobayashi's actions, but extended good wishes for the former champ.

"Takeru Kobayashi's actions at the Hot Dog Contest in Coney Island were inappropriate and unfortunate, but it did not diminish Joey Chestnut's victory, or the holiday tradition that dates back generations," Major League Eating said. "Kobayashi was a great champion and we hope that he is able to resolve his current situation and move past this."

Kobayashi said Thursday he will be taking part in a pizza eating contest in Ontario, Canada, later this month.