Police: Arizona escapees may be in Yellowstone area 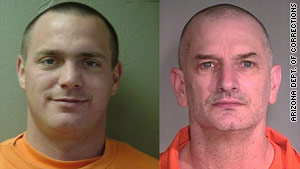 Authorities say they believe Tracy Province, left, and John Charles McCluskey are hiding apart from each other.

Read more about this story at CNN affiliate KTVK.

(CNN) -- Authorities believe two Arizona prison escapees and their alleged accomplice may be in the Yellowstone National Park area of Montana and Wyoming, based on recent information, the U.S. Marshals Service said Sunday.

John Charles McCluskey, 45, and Tracy Province, 42, are described as armed and dangerous. They have been at large since fleeing an Arizona prison on July 30. A third escaped inmate, Daniel Renwick, 35, was arrested the day after the escape in Rifle, Colorado, where he got in a shootout with police.

David Gonzales, the U.S. marshal for Arizona, told CNN that the remaining fugitives are now suspected in the killings of a couple whose bodies were found Wednesday in New Mexico.

"There was evidence that ties them, our suspects, who escaped from prison, directly to their murders," Gonzales told CNN.

Gonzales said the fugitives have frequented truck stops and campgrounds. He said McCluskey and Province have "white supremacist leanings" and could be looking for "people who are sympathetic to their cause."

Yellowstone sits at the northwest corner of Wyoming and extends a short distance into Montana and Idaho, both states where white supremacist groups have attempted to take root. Thomas Henman, a spokesman for the Marshals Service, said Arizona prison officials have said the convicts belong to the Aryan Brotherhood prison gang, but there was no concrete information to tie them to white supremacist groups outside prison.

A team of marshals from Arizona has been working in the Yellowstone area since Sunday morning, along with marshals from Montana and Wyoming and officers from the National Parks Service. He wouldn't divulge the source of the information that has led authorities to Yellowstone, but said it is believed to be very credible.

A $40,000 reward is being offered for information leading to the escapees' arrest, he said.

McCluskey was serving 15 years for attempted second-degree murder and other charges, while Province was serving a life sentence for murder and armed robbery. A female accomplice helped Province, McCluskey and Renwick escape by throwing cutting tools over a prison fence, according to Charles Ryan, director of Arizona's Department of Corrections.

"Information developed within the past two days indicated the escapees may be hiding in the Yellowstone Park area within Montana and Wyoming," U.S. Marshals said in a statement Sunday. "It is believed Tracy Province has separated from John McCluskey and Casslyn Welch."

The New Mexico Department of Public Safety said Saturday police have forensic evidence linking Province and McCluskey to a couple found slain in New Mexico last week. Two burned bodies were found in a camper Wednesday in Santa Rosa, New Mexico, according to Peter Olson, spokesman for the department.

New Mexico police have yet to positively identify the burned bodies, but believe they are Linda and Gary Haas of Oklahoma, whose truck was found 120 miles away in Albuquerque, New Mexico, according to Olson. He would not elaborate on the nature of the forensic evidence.

Washburn, who is Welch's aunt, allegedly provided "financial and other aid" to McCluskey, Province and Welch. A search warrant was executed, and Washburn was being held on $250,000 bond at the Gila County Jail in Globe, Arizona, the U.S. Marshals said.

In an interview with CNN Arizona affiliate KTVK, Washburn's husband said that he'd shoot his stepson McCluskey if he saw him again.

"I told the U.S Marshals I haven't got that long to live," Jack Washburn said. "(I'd) serve my time."

After the break, the inmates and the accomplice abducted two truck drivers at gunpoint on Interstate 40 outside of Kingman, Arizona, and hijacked their 18-wheeler, according to the Mohave County sheriff's department in Kingman. The truck drivers and the rig were released five hours later in Flagstaff, about 135 miles to the east.

The fugitives were later believed to be driving a 2002 silver Volkswagen Jetta purchased last Saturday in Phoenix. They were later spotted on a security camera in a bank inside a grocery store in Goodyear, Arizona, according to

Barrett Marson, spokesman for the Arizona Department of Corrections.