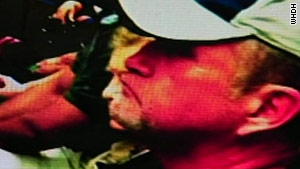 This is the photo put out on Twitter that helped Boston police arrest a suspect in a flashing incident.
STORY HIGHLIGHTS
RELATED TOPICS

See more about this story at CNN affiliate WHDH.

(CNN) -- An alert rider of the Boston area transit system helped nab an alleged flasher by posting a photo of the suspect on Twitter, according to the Massachusetts Bay Transit Authority.

Rider Nay Khun was riding the train Wednesday afternoon when he spotted the suspect "fidgeting with his crotch area with his zipper open and his penis exposed," according to the MBTA.

Khun immediately posted to his Twitter account a photo of the man, saying "pervert on the 2nd car of the red line ... help me report him."

He was arrested Friday for open and gross lewdness, according to a statement from MBTA police.

"He felt that the way he was trying to leverage a police response ... was to use Twitter, and in this case it worked quite successfully," O'Connor said.

But Khun was modest about his role in the arrest, saying -- in a Twitter post, of course -- that "the [MBTA police] are the real heroes here. Swift work by their finest."