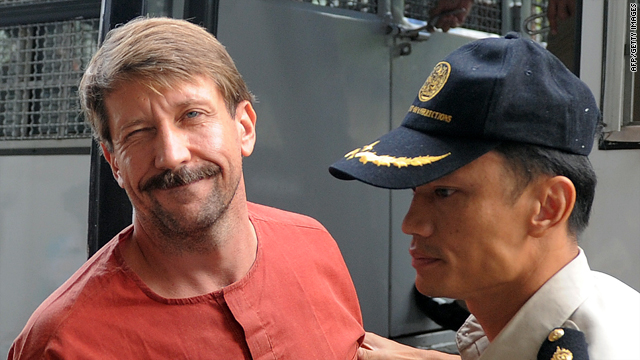 The court ruled that the extradition process must be completed within three months, otherwise Bout will be released.

Bout, a former Soviet military officer, was shackled in chains during the hearing. His wife and daughter were also in the courtroom. After the ruling, they stood up and cried.

"We are extremely pleased that the Appeals Court in Thailand has granted the extradition of Viktor Bout to the United States on charges of conspiring to sell weapons to a terrorist organization for use in killing Americans," said a statement by acting U.S. Deputy Attorney General Gary Grindler. "We have always felt that the facts of the case, the relevant Thai law and the terms of our bilateral extradition treaty clearly supported the extradition of Mr. Bout on these charges."

"I can assure you that we'll do everything necessary for his return to his home country," Lavrov told reporters, according to RIA Novosti.

Bout had been indicted by U.S. federal authorities on a series of charges, including counts of illegally purchasing U.S. cargo planes to ferry weapons to warring parties and regimes in Africa and the Middle East.

Thai courts had previously balked at extraditing Bout to the United States on the basis of the original charges against him, which centered on his alleged efforts to send millions of dollars worth of weapons to arm guerrilla fighters in Colombia. Last year, a Thai court rejected the U.S. government's request for extradition.

Bout was arrested in Bangkok in March 2008 after a sting operation led by agents of the U.S. Drug Enforcement Agency, posing as members of the Revolutionary Armed Forces of Colombia (FARC). Bout, widely regarded as a prolific arms dealer, has been in Thai custody since.

Bout has repeatedly said he has not broken any laws and the allegations against him are lies.

He is accused of supplying weapons to war zones around the world -- from Sierra Leone to Afghanistan.

In February, a federal indictment charged Bout and an alleged co-conspirator with the illegal purchase of a Boeing 727 and a Boeing 737, money laundering and wire fraud.

The United States charged Bout in 2008 with agreeing to sell surface-to-air missiles, armor-piercing rocket launchers, "ultralight" airplanes, unmanned aerial vehicles, and other weapons to FARC. Justice Department officials have sought his extradition since then.

It is widely believed that he inspired the character of Yuri Orlov, the arms dealer played by Nicolas Cage in the 2005 film "Lord of War."