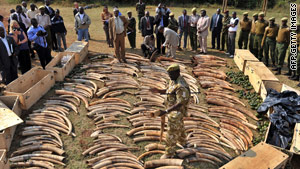 The cargo had been disguised as avocados, according to the service, which says its mission is "to sustainably conserve and manage Kenya's wildlife and its habitats in collaboration with other stakeholders for posterity."

"Most of the tusks seem to have been collected from natural deaths of about 150 elephants over the last 20 years with the latest likely to be 6 months old," it said in a news release. "None of the tusks had the indelible ink used for marking government-held stocks. DNA tests will be conducted to determine the tusks' actual origin."

The seizure and arrests resulted from a joint operation that included the Kenya Wildlife Service, Kenya Revenue Authority, Lusaka Agreement Task Force and the Kenya Police, the wildlife service said.

On Saturday night, the airport's warehouse security contacted a canine unit after becoming suspicious about a cargo destined for Malaysia through Dubai by Emirates Airline, it said.

"The cargo, which was falsely declared as containing only fresh avocado fruits, was packed in 12 wooden boxes, which raised a red flag due to its mode of package, weight and destination," it said.

Inside the boxes, officials found the contraband packed among avocados and wrapped in black paper and banana leaves -- packaging used in an attempt to evade detection, the wildlife service said.

Also last year, 13 rhinoceroses were illegally killed in the country, up from five in 2008, it said.

There are currently about 400,000 elephants in Africa, it said.

After the Convention on International Trade in Endangered Species banned international commercial ivory trade in 1989, demand dropped as did the price of ivory -- from $300 per kilo to about $3 per kilo, it said.

As some southern African elephant populations appeared healthier, restrictions eased in 1997 and 2002, when Botswana, Namibia, South Africa and Zimbabwe were allowed to sell limited stocks of ivory to Japan.