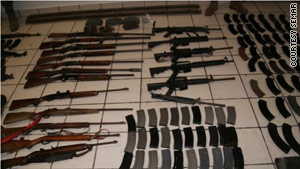 These guns were found at the Mexican ranch in Tamaulipas state, where 72 bodies were discovered.
STORY HIGHLIGHTS

(CNN) -- Seventy-two bodies discovered at a ranch in northeast Mexico belonged to migrants who were making their way toward the United States, Mexican officials said Wednesday.

The motive for the killings was under investigation, though officials pointed out that Mexico's drug cartels have expanded their activities to include extortion and kidnapping of immigrants.

"Mexican institutions have hit the operational structures of these criminals and their income, and because of that, they turn to extortion and kidnapping of migrants, as well as recruiting them to force them to become part of their group of hit men," Poire said.

The bodies of the 58 men and 14 women were found above ground in a structure on the ranch, which is about 14 miles (22 kilometers) from the town of San Fernando, near the border with Texas.

The Mexican navy, which was called in to investigate the case, said it is one of the largest discoveries of bodies in Mexico's 4-year-old war on organized crime.

Members of the Mexican navy were tipped off to the site after a man with a gunshot wound approached a military roadblock. The man said he had been injured by a criminal gang, according to a statement released by the navy.

Mexico's attorney general's office identified the man as an Ecuadorean immigrant with a bullet wound to the neck.

"The navy went to the area where the man came from and encountered gunfights. A naval officer was killed and three of the delinquents were killed," said an officer who answered the telephone at the navy's communication department. The officer, who was not authorized to speak on the record, declined to give his name.

After the gunbattle, authorities said, they found a stash of weapons, including 21 rifles, camouflage uniforms, bulletproof vests and four trucks. One of the vehicles had been disguised to look like a truck from the Ministry of National Defense, officials said.

"This discovery once again demonstrates the extreme danger and violence that Central Americans face on their treacherous journey north, as well as Mexican authorities' abject failure to protect them," Amnesty International said. "Mexico must immediately investigate this massacre, bring the perpetrators to justice and establish the identities of those killed so that their families can be informed."

Wednesday's gruesome discovery came about a month after authorities in the neighboring state of Nuevo Leon discovered 51 bodies in nine mass graves.

In that instance, investigators found charred remains, incinerated bone fragments and stains of fire on the ground where bodies were presumably burned in steel drums, the state-run Notimex news agency said.

The bodies were mostly males between age 20 and 50, Notimex said. Many of them had tattoos.

Similar mass graves have been discovered in the Mexican states of Guerrero and Quintana Roo since late May. Authorities have linked them to Mexico's ongoing drug war.

Nuevo Leon and Tamaulipas, which border Texas, have seen a marked increase in drug violence this year due to an intensifying rivalry between the Gulf cartel and the Zetas gang, which was formerly the cartel's armed branch.

Last week, authorities found the bound and blindfolded body of Edelmiro Cavazos Leal, the mayor of a city in Nuevo Leon. He had been abducted two days earlier.

His body was found on the outskirts of the city of Santiago, where Cavazos was mayor. There were signs of torture.

More than 28,000 people have died in drug-related incidents since President Felipe Calderon intensified the government's fight against drug cartels and organized crime after taking office in December 2006.

About 90 percent of the fatalities have been among cartel members and other criminals, Calderon has said.