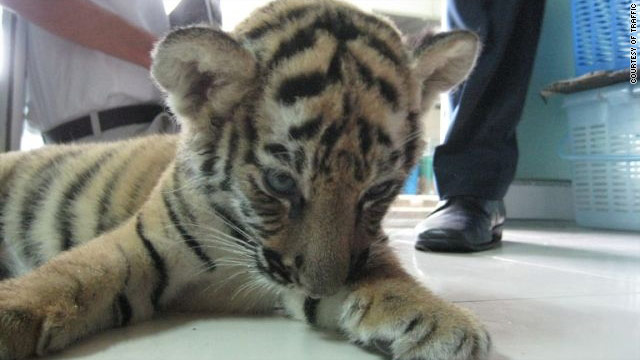 Bangkok, Thailand (CNN) -- A live tiger cub hidden in a suitcase filled with stuffed toys was spotted as it went through a luggage X-ray at a major Thai airport, a wildlife trade monitoring network said.

Investigators found a sedated, two-month-old tiger cub when they opened the bag for inspection.

Officials are trying to determine where the cub came from and whether it was caught in the wild or bred in captivity, TRAFFIC said.

Authorities found the tiger Sunday in a suitcase belonging to a 31-year-old Thai national, who was scheduled to board a flight for Iran, the organization said.

"If people are trying to smuggle live tigers in their check-in luggage, they obviously think wildlife smuggling is something easy to get away with and do not fear reprimand," Shepherd said. "Only sustained pressure on wildlife traffickers and serious penalties can change that."