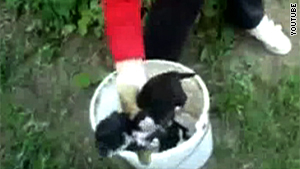 Animal rights groups are offering a bounty for information leading to any arrests in the incident.
STORY HIGHLIGHTS
RELATED TOPICS

(CNN) -- A video apparently showing a young woman throwing live puppies into a river has sparked outrage across the Internet.

And now it has also led to an animal rights group offering a bounty for the arrest of the people behind it.

People for the Ethical Treatment of Animals has offered a reward for information leading to the capture and arrest of the people behind what it calls a "heinous act" of cruelty.

"Animal abusers are cowards," PETA Manager Martin Mersereau said in a news release announcing the $2,000 reward. "They take their issues out on the most defenseless beings available to them."

In the video, a girl in a red hooded sweatshirt is seen throwing at least six puppies into a fast-moving river.

She appears to speak Croatian, while repeatedly picking live animals from a bucket and throwing the squealing puppies into the water. It's not clear what eventually happened to them.

CNN could not independently verify the authenticity of the video.

The tape was originally posted on YouTube, but was quickly pulled down. It is still widely available online and has gone viral, with sites such as LiveLeak.com registering more than 1.3 million views of the footage.

Web users have banded together on sites like 4chan.org to help identify the woman and the off-camera man who filmed it.

PETA says that clues in the video and the original post indicate that it may have been filmed near the Vrbas River in Bosnia-Herzegovina.

A facebook page dedicated to helping track them down had more than 7,000 people sign up since the video was posted Monday.

Users of the 4chan.org site have been in the news recently for identifying the person behind a similar incident involving a British woman caught on a security camera throwing a cat in a trash can last week.