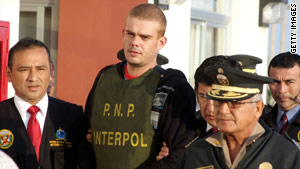 (CNN) -- Joran van der Sloot admitted in an interview with a Dutch newspaper that he extorted money from the family of Natalee Holloway, but his attorney in a Peruvian murder case suggested Monday that his client's comments may have been mistranslated.

Attorney Maximo Alteza said he is not involved in the case of Holloway, the Alabama teenager who disappeared in Aruba after going out on the town with van der Sloot, and was reluctant to comment on van der Sloot's interview with The Telegraph.

"Maybe there were some mistakes in the translation," he said. Alteza said van der Sloot was not paid for the interview.

"I wanted to get back at Natalee's family," van der Sloot said from prison in the Dutch interview. "Her parents have been making my life tough for five years."

"When they offered to pay for the girl's location, I thought: 'Why not?'" he said.

Van der Sloot faces a count of wire fraud and a count of extortion in the United States for allegedly trying to extort more than $250,000 from Holloway's family in return for the location of her body. He has denied responsibility for her disappearance.

He was arrested twice in Aruba in connection with the Holloway case but has never been charged.

The 22-year-old Dutch citizen is awaiting trial in Lima, Peru, where he stands accused of killing Stephany Flores in a hotel room.

Also Monday, a Peruvian court voted 2-1 to reject van der Sloot's contention that he is being held unlawfully, but the court requires three votes to secure a decision. Alteza said that a fourth jurist will hear the case and cast a vote at a public hearing next week. If that judge votes in favor of van der Sloot, a fifth judge will hear the case to break the tie.

Alteza said that van der Sloot's constitutional rights have been violated and he "could be released because of the mistakes made by the police during the investigation."

"It doesn't matter if he is innocent or guilty," he said.

In Session's Mayra Cuevas contributed to this report.