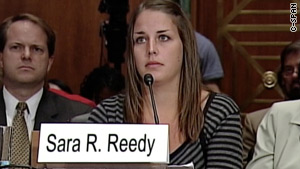 Sara Reedy testified about her post-rape ordeal at the Senate hearings on Tuesday.

Washington (CNN) -- Are law enforcement officials producing misleading statistics on the prevalence of rape in America?

Sen. Arlen Specter, D-Pennsylvania, who convened a hearing Tuesday on the "chronic failure to report and investigate rape cases," agrees. Specter also indicated during the Senate Judiciary subcommittee hearing that he would push for change.

Advocates question the rape statistics because, they note, the federal government is using a 1929 definition of the crime that excludes male victims, statutory rapes and those committed without force.

Using such an antiquated, narrow definition is a harmful disservice to countless victims, according to Carol Tracy, executive director of the Philadelphia-based Women's Law Project. Specter agreed, saying the definition is not "inclusive like it should be."

Men account for roughly 10 percent of victims in the United States, said Scott Berkowitz, head of the Rape, Abuse and Incest National Network.

The adoption of broader rape statistics is critical to the recovery process for male victims, added Dr. Richard Gartner, a spokesman for the group Male Survivor.

Back in the 1970s, according to Berkowitz, the FBI tried to address the shortcomings of its crime reporting system by devising a survey --- the National Incident Based Reporting System -- featuring an "updated definition of rape [which] includes both male and female victims."

But this solution, Berkowitz said, "is expensive for local law enforcement agencies to utilize." Sen. Ben Cardin, D-Maryland, agreed about the cost, but said nevertheless his state had decided to implement the survey.

The addition of Maryland would boost compliance for a survey that has struggled to reach the same degree of compliance as the Uniform Crime Report (UCR), which collects data from 17,000 jurisdictions and forms the basis for the statistics released earlier this week.

Greg Scarbro, who oversees the drafting of the UCR, told CNN he is aware of concerns relating to the definition for rape. Scarbro said he was not aware of any discussions in the past directed at changing the definition, but indicated that he is open to the notion of possible revisions.

"Our program stands ready to assess any of our definitions," he said.

Gartner told CNN that male rape victims face unique challenges. Among other things, men are socialized to view themselves as in charge of sexual activity, he said. Often, when confronted with sexual violence, men tend to assume they must be somehow responsible for what has happened to them.

Men also worry about what Gartner calls the myth that abuse victims become abusers themselves. In fact, he says, many male survivors who eschew rape treatment for years will seek help grappling with that fear.

"A lot of men come to therapy when they have a baby because they are scared to be alone with the baby," Gartner said, adding that the vast majority of those men and boys who are abused will not become abusers themselves.

"Men who have been abused are very isolated," he added. The statistics help to "make people feel less alone."

Statistics were of great concern to the witnesses and the senators at the hearing. "We have to have a constant set of numbers," Cardin said, adding that without good statistics, "we really don't have a good picture of what is happening nationwide."

Tracy, who established a women's shelter in Philadelphia, said she became aware about a decade ago of the marginalization of victims created by the more commonly accepted narrow rape definition. Specter thanked her for her efforts.

"You have pinpointed a very serious problem," he said.

In the late 1990s, Tracy noted, the Philadelphia Inquirer ran a series of stories concerning the police department's handling of rape reports.

"Incidents would be reported to the police department, (where) the special victim's unit would review it and, instead of a thorough investigation ... refile it into a non-criminal category," Tracy said. "It was an unwritten rule to keep the crime (rate) down."

By reclassifying the complaints, Tracy said, the police also removed the burden of having to report the crime to the FBI.

In the tumult that followed the articles' publication, the Philadelphia Police Department launched an investigation into the reclassifications. Detectives examined every crime submitted to the special victims unit, including several hundred alleged rapes that ultimately went unreported.

Today, the Women's Law Project holds up the experience of working with the police department in Philadelphia as one of the most pressing reasons for a congressional investigation.

Both Tracy and Philadelphia Police Commissioner Charles Ramsey testified about the continued need for collaboration.

"I firmly believe that partnerships between law enforcement agencies and our social service ... counterparts are absolutely essential," Ramsey said.

That experience was held up as a successful partnership and a potential model for improving institutional responses to rapes around the country.

Specter implored other advocacy groups to get involved with their local police departments. "Knock on their doors," he said, "and if they don't respond knock on the mayor's door."

Along with the talk of successes and potential solutions, rape survivors shared stories of pain and frustration. Sara Reedy spoke of facing a skeptical police detective after her sexual assault. First the police detective questioned her account, she testified, and later arrested her for a theft that occurred during the course of her attack.

Thirteen months after the assault, a serial rapist confessed to 12 assaults, including Reedy's. Only then, was she cleared of the theft charge. Sen. Al Franken, D-Minnesota, called her story "simply horrific."

The senators also expressed dismay about how police in several major cities are reportedly handling rape crimes. Cardin specifically brought up Baltimore, Maryland, which he said has the highest rate of rape cases deemed false or baseless.

"This generally means you don't believe the victim." he said.

Tracy, looking back on her experience in Philadelphia warned that other jurisdictions "are using similar tactics to sweep rape cases under the rug."

"The point of the (FBI statistics is) to allow communities to know," she said. Sadly, with the current definition, too many communities "have been misled."

"There is a lot more to rape then is in that definition," Specter said, adding, "I think we can get the FBI to change its definition."