New life for horses ... with prisoners 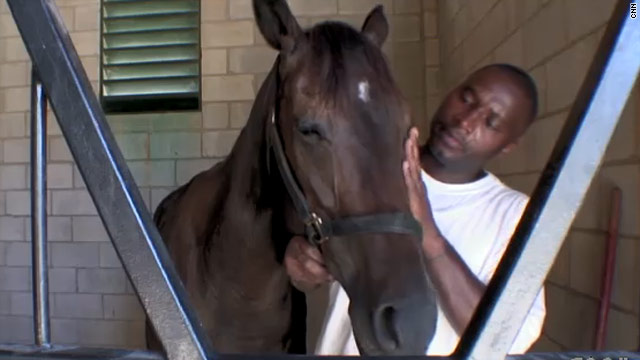 Sykesville, Maryland (CNN) -- It's the dirty little secret of the racing industry. Thoroughbreds who don't make the winner's circle, are injured or simply too old to race are discarded by their owners, auctioned off -- sometimes to the slaughterhouse. Now these horses are getting new lives.

The twist? Prison inmates looking for their own second chances are helping save them.

In the rolling hills of Carroll County, Maryland, is Second Chance Farm. Alonzo Pickett leads a horse to the pasture to graze.

"Greek is a beautiful horse. I love him," says Pickett. "I think he's a gentle giant."

The 7-year-old gelding came to the farm after a leg injury ended his racing career.

Each year thousands of racehorses in the United States like Greek are sent to slaughterhouses and their meat sold overseas, according to the nonprofit Thoroughbred Retirement Foundation. That's why the foundation funds programs in eight prisons across the United States to rescue these abandoned horses and train prisoners to "gentle" them so they can be adopted.

The inmates also have duties beyond grooming the horses. They maintain the farm buildings and the grounds.

Pickett, 44, figures he has spent at least 14 years of his life behind bars. It is his third prison sentence, this time for drug possession.

"It could have been a lot worse," he confides. "A lot of guys that I grew up with ... are deceased."

But Pickett maintains this will be his last time in prison and he thinks working with Greek as part of this program is what has changed him.

"It gave me a chance to really evaluate who I am," he says.

"Everybody thinks it's about the horses," says Gary Maynard, Secretary of Public Safety for Maryland prisons. Maynard saw the benefits of the program in other prison systems where he worked and brought it here.

"It's really about the men that work with the horses and what changes they go through as they learn to care for an animal, as they learn mutual trust and self-respect."

The bond between Pickett and Greek is evident as the inmate gently prods the animal for grooming and softly speaks to him. Pickett calls the bond they share a mutual support system.

Conni Swenson worked with racehorses many years ago before coming to work for the Maryland Department of Corrections. She is the program coordinator for Second Chance Farm and says she daily observes the unconditional acceptance the horses have for the inmates as each come to trust the other.

"They learn compassion. They learn patience," says Swenson. "If you have a 150-pound gentleman and you have a 1,200-pound horse and you need the horse to do something, you're not going to teach that horse to do it through brute force."

There is a striking difference between the farm and the prison, where the inmates return each night. There are guards at the farm but no bars, no razor wire. Pickett notes the atmosphere of serenity at the farm, far from what he calls "negative conversations" at the prison.

"You look at these grounds, the meadows, the horses grazing in the field," says Felicia Hinton, assistant commissioner, Maryland Department of Corrections. "It can only put gentleness inside of you," she says, smiling. It's her responsibility to make sure each inmate is ready to begin life outside the prison walls.

"It gives them a sense of humanity," she says. Hinton calls the program an opportunity to change a life.

Pickett agrees. He will be released from prison in just a few months. He plans to move to his grandfather's farm to care for his aging father.

Hinton considers that a measure of the success of the program. "Our responsibility is to send a man or woman out of prison a better person."

As Pickett cleans and scrapes Greek's hooves, he speaks with pride about his time at Second Chance Farm.

Swenson says she believes in each of the inmates who has gone through the program. She likes to quote visitors her favorite Winston Churchill passage, "There is something about the outside of a horse that is good for the inside of a man."

"That is absolutely true here," she says. "I see it every day."