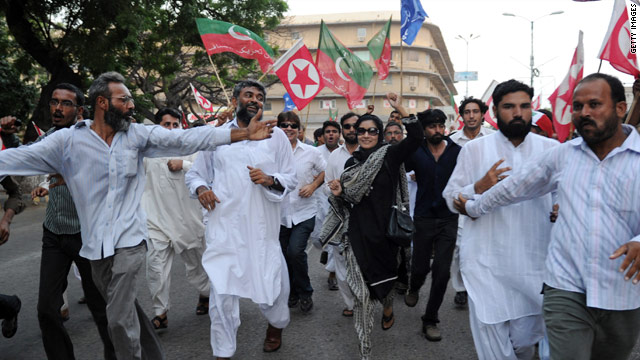 New York (CNN) -- Pakistan's foreign minister expressed disappointment Friday over what he called "a very harsh sentence" for a Pakistani scientist convicted of attempting to kill Americans in Afghanistan.

A federal judge issued Thursday the 86-year sentence for Aafia Siddiqui, who was convicted by a jury in February on seven charges, including attempted murder and armed assault on U.S. officers.

"I think she has not been given the benefit of the doubt," Pakistani Foreign Minister Makhdoom Shah Mahmood Qureshi told CNN Friday. "But she does have a right to appeal. I'm sure her family and the government will consult and will think of going with the appeal."

Qureshi said the sentence has sparked reaction in Pakistan, where "people have protested, people have demonstrated. Many people feel that she is innocent and she was framed and she should have got a fairer chance."

He added, however, that Pakistanis "also understand the government did its best, and we have our limitations. There is due process of law and we have to stay within the process of law. But there is a disappointment and that has been expressed on the streets of Pakistan."

He spoke to CNN while in New York to attend sessions at the United Nations.

"I'm disappointed at the sentence," he said. "I think it's a very harsh sentence."

Prosecutors said Siddiqui picked up a rifle and shot at two FBI special agents, a U.S. Army warrant officer, an Army captain and military interpreters while she was being held unrestrained at an Afghan facility on July 18, 2008. The agents returned fire, shooting her in the abdomen.

Siddiqui was extradited to the United States in August 2008, after the shooting incident.

At her sentencing Thursday morning, the 38-year-old MIT graduate shook her head in defiance and wagged her finger in a "no" gesture as U.S. District Judge Richard M. Berman laid out the case against her.

But Siddiqui was more subdued when Berman allowed her to speak before the packed courtroom filled with family, spectators and foreign and national press.

Clad in a khaki suit and a hijab that covered most of her face, Siddiqui repeatedly asked her Muslim supporters to not "get emotional."

"I don't want any violence in my name," Siddiqui said of the demonstrations in Pakistan, where her case has become a cause celebre. "If you do anything for me, please educate people about Islam because people don't understand that it is a religion of mercy."

CNN's Becky Anderson and Kiran Khalid contributed to this report.