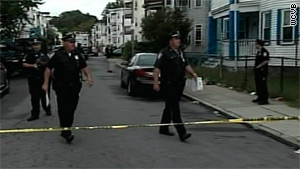 Police responded to 911 calls about a shooting in Boston's Mattapan neighborhood and found three adults dead at the scene. A young child was rushed to a local hospital, where he was pronounced dead shortly after the arrival. The fifth victim is in critical condition at Beth Israel Hospital. Authorities do not expect him to survive, they said at a midday news conference.

Dan Conley, the district attorney, told reporters that this was not a random shooting. The individuals were found lying in the street -- one of them naked.

Earlier this month, a Domino's Pizza delivery man was murdered delivering pizza to a vacant home where three men stabbed him multiple times. "To those who have no respect for life and would commit these brutal acts, our streets are not your playgrounds. Our kids cannot be your collateral damage," Menino said. "We will not allow you to poison our city."

Since January of this year, there have been 52 homicides, compared with the 40 homicides in the same period last year, according to Boston Police.

Boston Police do not have any suspects, but they are looking for a silver or gray Ford Explorer that witnesses saw leaving the scene, Police Commissioner Ed Davis said.