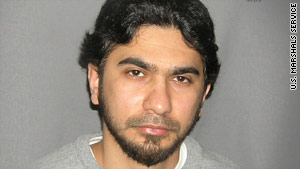 Shahzad is accused of attempting to set off a vehicle bomb in Times Square on May 1, according to documents filed in federal court Wednesday. The bomb failed to detonate and he was arrested two days later while trying to leave the country on a flight from New York's John F. Kennedy International Airport bound for Pakistan.

In a sentencing memo submitted to a federal court Wednesday, prosecutors paint a picture of a young man determined to target Americans on a large scale.

According to the memo, Shahzad used webcams accessible on the Internet "as part of his effort to maximize the deadly effect of his bomb." The memo says Shahzad found webcams online and studied the real-time video feeds of different areas in Times Square to determine when and where he could inflict the most damage.

Prosecutors say Shahzad "wanted to select the busiest time for pedestrian traffic in Times Square because pedestrians walking on the streets would be easier to kill and to injure than people driving in cars."

Federal prosecutors also contend in the sentencing memo that Shahzad believed the bomb would kill about 40 people and that he "was prepared to conduct additional attacks until he was captured or killed." According to the document, at the time of his arrest, Shahzad waived his Miranda rights and stated that "if he had not been arrested he planned to detonate a second bomb in New York City two weeks later."

On June 21, he pleaded guilty to all 10 counts in the indictment against him, telling the court, "I want to plead guilty 100 times because unless the United States pulls out of Afghanistan and Iraq, until they stop drone strikes in Somalia, Pakistan and Yemen and stop attacking Muslim lands, we will attack the United States and be out to get them."

At that court appearance, Shahzad admitted to receiving five days of weapons training in Waziristan, in Pakistan, but the new federal document discloses more about that trip. Prosecutors say Shahzad spent 40 days beginning in December 2009 in the tribal region that straddles Pakistan and Afghanistan where he lived with members of the Pakistani Taliban, or TTP.

According to the document, he worked with an experienced bomb trainer affiliated with the TTP for five days. In addition, Shahzad was given $5,000 to help fund the mission and agreed to appear in a TTP video glorifying the planned attack.

The roughly 40-minute video, according to its description in the memo, features Shahzad quoting from the Koran while the other side of the screen is filled with images of Times Square after the botched bombing. Towards the end of the video, the memo quotes Shahzad as saying, "I have been trying to join my brothers in jihad every since 9/11 happened. I am planning to wage an attack inside America."

Prosecutors are seeking a sentence of life in prison for Shahzad. He is expected to be sentenced on October 5.