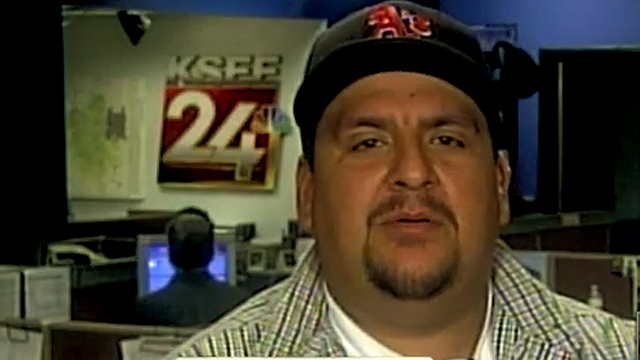 KFSN reports on the abduction of the 8-year-old Fresno girl.

(CNN) -- Some may call it chance, but Victor Perez believes a higher power was involved Tuesday when he chased after a vehicle suspected of carrying an abducted 8-year-old girl in Fresno, California.

A construction carpenter by trade until work slowed down, Perez has been recently cutting wine grapes, earning minimum wage.

Early Tuesday, there was a light rain, making that task unlikely.

Perez, 29, tuned in to television news coverage of the abduction, paying attention to the description and video of the suspect's pickup truck.

At about 6:45 a.m., Perez was outside his house talking with his cousin about the abduction when they saw a vehicle matching that description: an older-model, reddish-brown Chevrolet with a white stripe on the side.

"I thought, that could be the truck," Perez, a father of two boys, told CNN Tuesday night.

That's when he sprang into action. He jumped into his 1988 white Ford pickup and followed the vehicle.

Perez tried to cut off the vehicle several times to question the driver. One time, the driver told him, "I don't have no time [to talk]. My battery is dying."

The second time Perez pulled up to the Chevy, he saw the little girl, her head popping up from below view, and knew something was wrong.

"I kept telling him, 'That's not your little girl,'" said Perez. "We argued. We exchanged words."

Perez -- who admitted he did wonder at some point whether the motorist had a gun -- pulled up to the truck a third, and then a fourth time, when he blocked the pickup truck.

Immediately after the truck stopped, the girl was out. Perez said he believes the driver pushed her out.

"I was beyond scared," he said.

Perez got out of his vehicle and stayed with the girl. She was wearing a Winnie the Pooh sweater, he said.

The chase had taken him about a mile from his house and into another neighborhood. He yelled for residents to get the girl a blanket.

The Chevy drove off. By then, Perez had a partial license plate number, which he gave to dispatchers, Police Chief Jerry Dyer said.

About 40 minutes later, police caught up with the truck, now parked, and arrested Gregorio Gonzalez, 24, of Fresno. Charges against him will include kidnapping, false imprisonment and sexual assault, Dyer said. The suspect was not armed.

Police, officials and the parents of the girl praised Perez and other good Samaritans and citizens who aided the search and took action to find the girl.

"This is a remarkable accomplishment for an entire community," Mayor Ashley Swearengin said.

Perez said the incident was beginning to sink in Tuesday night. "I probably saved a little girl's life."

The question arises: What would have happened if Perez had gone to work this day?

He quoted a relative who said divine providence might have stepped in.