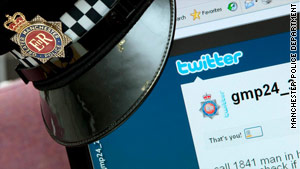 On Thursday, police in Greater Manchester, in northwest England, used three Twitter pages to alert the online public about the wide range of matters that they deal with on a regular day, from children stealing candy to physical harassment accusations.

The experiment, which dominated Twitter trends across Britain, aimed to draw attention to Chief Constable Peter Fahy's belief that police need to be "funded and measured in a different way."

The department set up three accounts -- @gmp24_1, @gmp24_2 and @gmp24_3 -- to accommodate the volume and diversity of tweets. More than 14,000 online users tracked the police's developments on Twitter during the one-day experiment.

Tweets ranged from bogus 999 calls, to reports of fighting youths and taxi drivers and even one call about a "four foot doll or robot" on a road.

In the course of one hour, police tweets included:

"Call 3112 Abandoned 999 call. Two-year-old playing with phone.
Call 3104 Report of man missing from hospital - returned while caller on the phone
Call 3095 Taxi drivers fighting in Rochdale.
Call 3077 Youths drinking and fighting in Bury - patrols attend, no sign of youths.
Call 3075 Men taking drugs in Bury - officers attend. Man searched, no drugs found
Call 3058 Theft of credit on mobile phone.
Call 3069 Someone has driven away from a petrol station without paying in Stockport.
Call 3045 Concern for the welfare of a relative living in Tunisia.
Call 3003 Reports of four foot doll or robot on Princess Parkway near M56 - officers attend but nothing there."

Police said the tweets' range should give citizens a good sense of what law enforcement officers' day-to-day life is like, including the police station often being the last place people call whenever they have a problem they can't easily solve themselves.

"The reality is that although crime is a big part of what we do, we do much else besides," Fahy said in a video posted on the department's YouTube channel, on which messages and news updates are regularly uploaded. "We are very much the agency of last resort."

In the videos, Fahy said that police often end up in the middle of social or personal entanglements -- be they disputes between relatives, acquaintances or strangers -- a situation that has received much social and political attention in the United Kingdom in recent months.

Fahy said that one goal of the department's Twitter foray is to give authorities and the public more evidence that may help guide decisions and make the department more effective in an era of ever tightening budgets.

In fact, one of the Manchester department's own tweets sum up the experiment's overarching purpose: "Today's updates are about transparency and the complexities of modern policing, which often aren't fully appreciated."