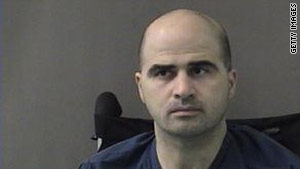 Fort Hood, Texas (CNN) -- The shooting at Fort Hood was captured on video by a soldier using his cell phone camera as he hid from the shooter, but he was ordered to erase it, the soldier said Friday.

Pfc. Lance Aviles spoke of the video as he testified on the third day of the Article 32 military hearing for Maj. Nidal Hasan, who is accused of killing 13 people and wounding 32 in the November 2009 shooting.

Aviles said he was told by a non-commissioned officer, who Aviles said was acting on the orders of an officer, to delete the video on the same day of the shooting. He did not describe to the court what the video contained.

It was not immediately clear whether the military would look into why the video was ordered deleted.

A Fort Hood official, who insisted on anonymity because of the ongoing criminal investigation into the shootings, said, "Since this matter was raised during the Article 32 hearing, it is for the Article 32 hearing officer to decide whether to make further inquiries to the soldier's chain of command for additional information."

Aviles also testified that he saw the gunman stop to reload and considered rushing him. But by the time Aviles got up, he said, the shooter "had already loaded another magazine. So instead of running to him, I ran off to the right."

Hasan, partially paralyzed, was wheeled into the courtroom by a blue-uniformed police officer. Occasionally he used his arms to reposition himself in his chair while listening to the testimony.

Spc. Megan Martin, speaking via video from Kandahar, Afghanistan, said she constantly relives the events of the day.

She said she was not injured, but "it was a nightmare that reoccurs every day."

Despite the trauma, she said she did not seek to delay her deployment to Afghanistan. "I wanted to carry on the mission as my fellow soldiers would have wanted me to," she said.