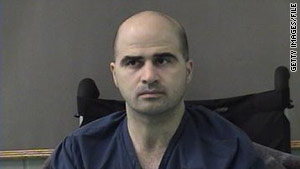 Fort Hood, Texas (CNN) -- One of the victims of the Fort Hood shootings last November described the shooter as showing no emotion as he fatally shot 13 people and injured dozens of others

"He wasn't happy, he wasn't angry," Sgt. 1st Class Miguel Valdivia testified Monday afternoon at a military hearing that began its second week. "It was some kind of passive look."

Valdivia said it took him a while to realize that the shooting was not some kind of exercise that was delaying him from getting his deployment approved.

"I was growing impatient because I wanted to get on with the paperwork," he said.

Staff Sgt. Eric Jackson said he heard multiple "pops" which he thought might be blanks. Then he saw a hand with a weapon coming around the side of a partition where he and others were taking cover.

Staff Sgt. Thuan Nguyen, said he heard noises and saw the colors of a laser pointer reflected on the floor.

By day's end, the prosecution had questioned 39 witnesses since the hearing began, with each one adding dramatic brush strokes to the canvas of what happened at Fort Hood last November 5.

Capt. Dorothy Carskadon, who still carries a bullet in her body from the attack, was shot four times. Like an earlier witness she told of a a female soldier on he floor near her who was calling out during the attack "my baby, my baby."

"She just kept saying she was hit in the stomach and crying 'my baby, my baby,'" Carskadon said. Under defense questioning Carskadon said it was impossible for her to tell whether the woman was pregnant.

Earlier Monday, the tragic final minutes of Pvt. Francheska Velez were recountedby Spc. Jonathan Sims, who described how, after the shooting, a pregnant woman was lying on the floor in a fetal position "screaming 'my baby, my baby.'" He recalled later seeing her flat on the floor, face down.

While Velez's name was not mentioned, the 21-year old was the only shooting victim who was known to be pregnant.

The second week of the Article 32 hearing into the shootings at Fort Hood started Monday where the previous week left off, with the first description of the encounter between the shooter and the police who shot him.

The prosecution continued a steady drumbeat of witnesses, using video links to connect with soldiers now serving in Afghanistan or Iraq. At times, the defense tried to highlight discrepancies between the original statements of the witnesses to military investigators and their hearing testimony.

Throughout it all, Maj.Nidal Hasan, the Army psychiatrist accused of being the gunman, sat impassively, sometimes rubbing his face with his hands, sometimes using his arms to reposition his partially paralyzed body in his wheelchair. He appeared to make a concerted effort to avoid looking at the spectators, which included families of the victims.

Pfc. Justin Johnson testified at the hearing -- which will decide if there is sufficient evidence to proceed to a court martial, with a possible penalty of death -- that he heard the shooting continue outside the processing center where the rampage began.

"I saw the police officer and I heard, 'Put the gun down now,' and they started shooting at each other," Johnson said.

Another witness, Spc. Joesph Foster, testified that the shooter spoke with a "strong, stern voice, like a drill instructor." Like other witnesses, Foster said he heard the man shout out "Allahu Akbar" -- Arabic for "God is great" -- and then felt the shooter's attention turn to him.

"The weapon came in my direction, the laser came across my eyes. I fell to the ground and I felt sharp pain in my hip," Foster said, via video feed from Kandahar, Afghanistan, where he has deployed.

Sims said he hid under a table and then felt the pressure of someone standing on top of the table. "I believe it to be the shooter," Sims said, adding that no one else would have dared stand up in the line of fire.

Again Monday it was easy to hear the sound of jets overhead in Kandahar during testimony from the airfield there. And again the questioning laid out the stark contrast between the mundane waiting in line to complete pre-deployment processing and the few moments of chaos and deadly violence once the shooting began.

Johnson had just begun a cell phone call to his mother. Foster was texting a friend. Another witness was listening to his iPod.

Army Maj.Randy Royer said he could smell the gunpowder in the air once the shooting began.

"It was just a massacre," Royer said. "There was blood all over."

Royer was shot twice, the bullets breaking an arm and a leg. He walked to the witness box late Monday morning with a metal cane, dropping it to the floor when he raised his right arm to promised to tell the truth.

Like so many other people crowded into the processing center that November midday, he said he first thought it was some kind of military exercise.

"I thought it was training. I thought to myself, 'This is a crazy training going on.' ... It was almost a constant sound, constant shooting."

The presiding officer, Col. James Pohl, interrupted a prosecutor who asked whether a witness had heard someone before the shooting "speaking Muslim." The witness, like others before him, had said that he heard someone shouting out in Arabic, "Allahu Akbar." At Pohl's prompting, the prosecutor, Maj. Larry Downend, rephrased his question to refer to someone speaking Arabic.