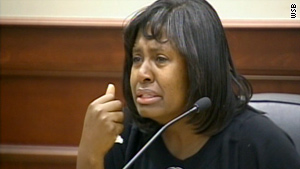 Atlanta, Georgia (CNN) -- A restaurant vestibule normally is a place for patrons to exchange greetings and hold the door for each other.

What occurred at an Atlanta restaurant last year turned into much more than that, with allegations of punches, kicks, racial invective and spitting.

Testimony providing two different views of the confrontation ended Friday in Clayton County Superior Court, with a man accused of punching and kicking a female patron at a Cracker Barrel restaurant agreeing to a plea deal. He received six months in jail.

"Justice was served," District Attorney Tracy Graham Lawson told CNN on Saturday, acknowledging that her case became unraveled when jurors learned the accuser faces charges of her own.

Troy Dale West Jr., who is white, was accused of screaming racial slurs while beating Tasha Hill, an African-American female Army reservist, at the Morrow restaurant in September 2009.

The Poulan, Georgia, resident faced 44 years if convicted of all charges. Felony charges of aggravated assault and false imprisonment were dropped and he pleaded guilty to four misdemeanors: battery, two counts of disorderly conduct and cruelty to children in the third degree, Lawson said. He has no prior criminal convictions.

The state asked for 48 months in jail. West's attorney, Tony Axam, asked for time served. The judge gave him 36 months and suspended all but six. West, who has served 40 days already, was sent to jail.

West, then 47, was arrested on misdemeanor charges after the incident, but Lawson took the case to a grand jury asking for more serious charges.

Hill was with her 7-year-old daughter when the incident occurred at the entrance to the restaurant.

Hill, then 35, testified the attack occurred after she warned West to be careful, after she said he almost hit her daughter with the restaurant door as she was leaving. West claimed he was trying to let the girl enter the restaurant.

West told police after the arrest that he hit Hill "after she spit on me and accused me of trying to hit her daughter with a door."

"She said, 'I'm a U.S. military soldier. I'll kill you," West testified Friday. "As I start to turn away, she spits in my face," CNN affiliate WXIA reported Friday. The defendant said he used an open hand rather than a fist.

Hill said she did nothing to provoke the alleged attack, adding that West yelled racial epithets at her during the beating.

"I don't feel I've done anything wrong," West said to Judge Geronda V. Carter on Friday about his plea. "But it's in my best interest."

Hill was angry that West did not get more time.

"I didn't ask you to hit me. You beat me down and you need to pay for it," she said. "You said you didn't do anything wrong. You can at least apologize if you did."

Lawson said facts she learned since the indictment and during the trial affected the case. A Cracker Barrel employee who claimed to have witnessed the confrontation was in the back of the restaurant and couldn't have seen it, she said.

And two "very credible" witnesses were adamant about seeing Hill spit on West, she said.

Hill has previous cases involving violent and verbal altercations and is currently charged with disorderly conduct from an incident this summer, Lawson said. Hill is accused of threatening to shoot two boys, claiming they burglarized her home, Lawson told CNN. Lawson said she heard a 911 call about the incident just before the trial began.

Lawson and an assistant prosecutor said they spoke with jurors after the plea deal. They confirmed they would likely not have convicted West of felonies. "They felt the resolution was fair," the prosecutor said.

The district attorney declined to answer whether she would have handled the case differently once she learned about the spitting testimony and cases against Hill. She said she knew of only one previous incident before the trial.

During the trial, assistant district attorney Jason Green asked West if it is acceptable to strike a woman.

"I wanted him convicted of something," she said.