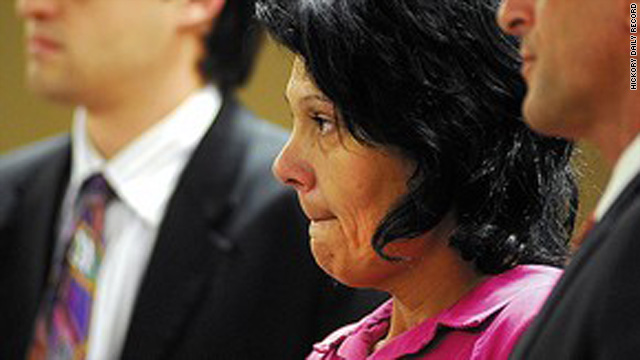 Elisa Baker, the stepmother of Zahra Baker, is accused of obstructing the investigation for the missing 10-year-old.
STORY HIGHLIGHTS

Hickory, North Carolina (CNN) -- The stepmother of a missing 10-year-old girl in North Carolina said during a jailhouse visit with two relatives this week that she blames a lot of her current predicament on her husband, one of those relatives said Friday.

The relative, one of two cousins who visited Monday with Elisa Baker in jail, said she was speaking publicly after a few family members met and "decided that we needed to share a few things that we do know."

"As we talked with her, she cried over missing Zahra and how her husband has left her to take all the blame for what has happened when he played a big part in this terrible situation," the cousin said in an exclusive interview with HLN's "Nancy Grace" producer Natisha Lance. The cousin spoke on condition of anonymity because of death threats the family has received.

Later, the cousin said Elisa Baker believed it was unfair that she was jailed "for something that he had done," referring to husband Adam Troy Baker, Zahra's father.

The cousin said she hoped that Zahra's body will be found soon, "since she is believed to be deceased and that all of the truth will come out."

The cousin said she and her sister visited Elisa in jail on Monday after more than two years during which they had not spoken.

The woman added that she had received three letters from Elisa, "and in each one of them she made it very clear how much she cared about Zahra and that she don't understand the man that she loves can be this, can do her this way."

The woman said she did not know what happened to the freckle-faced girl who lost her leg to bone cancer at age 5 and reportedly developed lung cancer a few years later.

Police launched a search for Zahra on October 9, but no one other than a family member had reported seeing her since September 25, when a woman saw her at a furniture store.

Police on Monday confirmed that a prosthetic leg discovered last week in brush off a North Carolina road belongs to Zahra Baker, whose disappearance is now being probed as a homicide.

Police said Elisa Baker admitted that she planted a fake ransom note the day after the girl's disappearance was reported.

Initially arrested on October 10 on charges unrelated to Zahra's disappearance, including writing worthless checks, Elisa Baker was additionally charged with obstruction of justice for leaving the note. That charge is a felony.

She is now cooperating with investigators, Hickory police have said.

Zahra's father was arrested late last month in nearby Catawba County on eight charges, including five counts of submitting worthless checks and three counts of failing to appear in court.

Police earlier acknowledged that Adam Baker faced bad-check charges unrelated to the disappearance of his daughter. But they did not initially arrest him, as he had been helping authorities in their search.

"Adam Baker has a lot of the answers," Elisa Baker's cousin said Friday. "What we do know about him is that he doesn't believe in God. He is very into paganism. He's ridin' around with a sign on his window that says Zahra was abused by her stepmother. If this is true, then why didn't he, the biological father, put a stop to it and protect his little girl?

"Why didn't he beg the public for someone to bring his daughter home? Why has he not personally searched for Zahra? How could a loving father begin his 911 call with, 'Hello, how are you doing?' He needs to answer these questions."

Adam Baker's attorney has not returned repeated phone calls from CNN requesting comment on the investigation.

During their discussion, the woman said her cousin told her that Zahra's cancer had been in remission, but that she was sick for the two weeks "before whatever's happened happened ... she did not completely come out and tell me what has actually happened."

The woman said that Elisa Baker "cared for that little girl deeply" and had taken a polygraph.

Asked why none of Elisa Baker's relatives had bailed her out of jail, the woman said, "I guess probably they're waiting for evidence or to find out what has really happened."

Asked if the family is divided about what may have happened, she said, "A little bit right now, yes."

Asked what she thinks happened to the girl, the woman said, "I absolutely have no clue. All of it is just so confusing and, until we get the facts, I'm not going to know what to think."