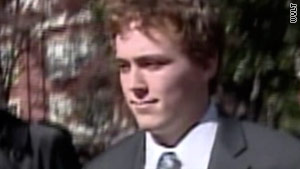 David Kernell was sentenced to one year and one day in federal prison, followed by supervised release.
STORY HIGHLIGHTS

(CNN) -- The man convicted of hacking into former Alaska Gov. Sarah Palin's e-mail account was sentenced Friday to one year and one day in either federal prison or a halfway house, according to a Knoxville, Tennessee, court deputy .

It will be up to the Federal Bureau of Prisons to decide where Kernell serves his time, though the federal judge in the case recommended placing Kernell in a halfway house.

U.S. District Judge Thomas Phillips rejected a request from Kernell's attorney for a sentence of probation only. Federal prosecutors had pushed for at least 18 months in prison.

Kernell was found guilty in April on two counts related to hacking Palin's e-mails to years ago.

At the time, Palin -- then governor of Alaska -- was running as the Republican vice-presidential nominee. Kernell was a student at the University of Tennessee.

Prosecutors said Kernell accessed Palin's e-mail by resetting the password. He then read the contents and made screenshots of the e-mail directory and other personal information.

The information included e-mail addresses, photos of family members and at least one cell phone number of a relative.

In court documents, federal prosecutors said Kernell should serve 18 months behind bars in part because he sought to "derail" Palin's campaign.

Kernell attorney's argued that there have been similar court cases where people have been sentenced to probation. What Kernell did, they said, was closer to a prank than a crime.

Kernell was not taken into federal custody immediately after being sentence Friday. Judge Phillips ruled Kernell will be able to self-report to the Bureau of Prisons, according to court deputy Rachel Stone.