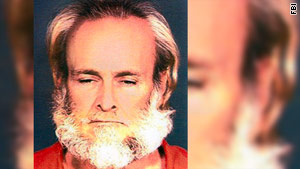 Thomas Steven Sanders was arrested in the early morning at a Flying J Truck Stop. He is suspected in the abduction of Lexis Roberts, 12, of Las Vegas, Nevada. She was later found dead.

His capture is unusual because Sanders was legally declared dead in Mississippi by family members some 16 years ago.

"However, we now know that he is still alive and has ties to several states across the country," the FBI said in a statement earlier this month.

Sanders, who is thought to be missing most of his teeth, has changed his appearance several times over the years. He is described as a white male, around 200 pounds with brown eyes.

In September, Sanders was seen purchasing bullets at a local Wal-Mart in Las Vegas. The ammunition he bought was consistent with the caliber weapon used during Roberts' homicide, the FBI said.

The girl's remains were found by hunters in early October in a wooded area north of Harrisonburg, Louisiana. She was last seen with her mother, Suellen Roberts, and Sanders.

Sanders was alone at the time of his arrest.