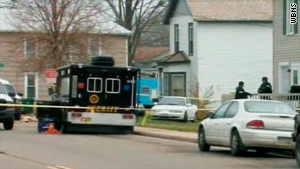 Sarah Maynard, 13, was found bound and gagged in the basement of a Mount Vernon, Ohio, home on Sunday.
STORY HIGHLIGHTS

(CNN) -- A 13-year-old Ohio girl who had been missing since Wednesday along with her brother, mother and a family friend was found bound and gagged Sunday in the basement of a Mount Vernon, Ohio, home, authorities said.

Sarah Maynard was taken to a hospital for evaluation and treatment of non-life-threatening injuries, said Knox County Sheriff David Barber. Authorities have interviewed her "somewhat," he said, but would not divulge what was said. Police believe she has been held since Wednesday, he said.

The teen was recovered in an early morning raid on the home involving a SWAT team. Matthew Hoffman, 30, who lives in the home, was taken into custody following the raid about 8 a.m. ET, Barber said, and faces a kidnapping charge. Additional charges are expected, Barber said.

Barber said a combination of intelligence information received and investigative work led authorities to the home. Authorities were hoping they would find all four people, but knew they might only find Sarah Maynard, he said.

Police were still investigating whether Hoffman knew any of the four people, he said. Asked if Hoffman was cooperating with authorities, Barber said he was not.

Herrmann failed to report to work at a Dairy Queen in Mount Vernon, in central Ohio, on Wednesday, Barber told CNN affiliate WBNS. A deputy twice went to her home in Howard, about nine miles east of Mount Vernon, and saw her pickup truck there. Although lights were on in the home, no one answered the door.

A Dairy Queen manager went into the home on Thursday and found blood inside, Barber told the station.

The children were in school Wednesday, but not Thursday, the sheriff said. Sprang's car was found at Herrmann's home.

Asked about Hoffman's criminal record, Barber said he served prison time for an arson conviction in another state. He said authorities believe Hoffman could "absolutely" lead police to the other three.

Sarah Maynard, following her release from the hospital, likely would be sent to live with her father. Before she was found, Larry Maynard told WBNS, "I am expecting the worst, hoping for the best."

Donna Davis, who lives on the same street as the home where the girl was found, told WBNS Hoffman was a "weirdo" and that she made her children come indoors when he was outside.

Mount Vernon is about 50 miles northeast of Columbus, Ohio.