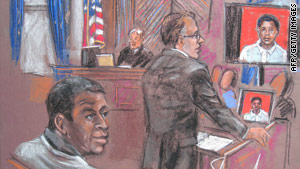 Jury deliberations in the terror trial of Ahmed Khalfan Ghailani are expected to continue on Monday.
STORY HIGHLIGHTS
RELATED TOPICS

New York (CNN) -- The judge in the New York trial of an accused terrorist conspirator rejected a defense plea for a mistrial on Monday after a juror claimed to be chastised after disagreeing with the conclusions of fellow jurors.

Judge Lewis Kaplan read aloud a note that he received from the juror, who asked to be "excused or exchanged" in the trial of Ahmed Khalafan Ghailani.

Ghailani faces charges of conspiracy and murder in the 1998 attacks on U.S. embassies in Nairobi, Kenya, and Dar es Salaam, Tanzania, that killed 224 people.

Kaplan told defense attorneys there was no good cause (for a mistrial), given the jury had only begun deliberations on Wednesday.

The move has fueled growing speculation over a possible hung jury in a case involving the first detainee held at the U.S. naval base in Guantanamo Bay, Cuba, to be tried in civilian court.

Ghailani defense attorneys have maintained that the 36-year-old Tanzanian was exploited by al Qaeda, the group that claimed responsibility for the attacks.

"Call him a dupe, call him a pawn -- used, set up like a bowling pin, in the immortal words of Jerry Garcia," defense attorney Peter Quijano said. "But don't call him guilty."

The prosecution, which made its closing arguments November 8, has accused Ghailani of 285 counts of conspiracy and terrorism-related charges.

Assistant U.S. Attorney Harry Chernoff said he played a key role in securing the trucks that carried the bomb in Tanzania and securing other materials.

"He is a mass murderer who has the blood of hundreds on his hands," Chernoff told the jury.

The trial, which began in October, has moved more quickly than originally anticipated.

Jurors listened to weeks of testimony from witnesses who were flown in from Kenya and Tanzania to testify, and jurors looked at dozens of government exhibits.

The defense called no witnesses and the defendant did not take the stand.

At the onset of the trial, the presiding federal judge barred prosecutors from calling a crucial witness, with the judge saying the government had obtained the identity and location of the witness through Ghailani when he was held and interrogated at a jail overseas run by the CIA.

Ghailani was captured in Pakistan in 2004 and moved to Guantanamo two years later. He was transferred to a federal prison in New York last year.

Throughout the trial, the defense has portrayed Ghailani as a man with local knowledge of Tanzania who was exploited by al Qaeda.

The government rejected the claim that Ghailani was duped into participating, pointing to evidence that he allegedly obtained gas tanks in Tanzania. They also noted his presence in Dar es Salaam and Mombasa, Kenya, with members of the bomb plot.

"This is Ghailani, " Chernoff said last week, pointing at the defendant, who at times appeared to be joking and laughing with his attorneys when the jury was not present. "This is al Qaeda, this is a terrorist. This is a killer. I ask that you return a verdict of guilty on all counts."