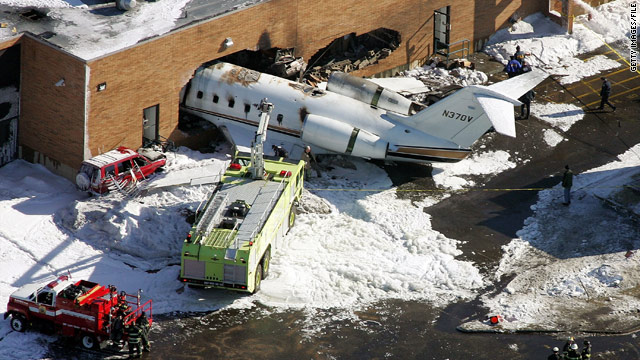 Emergency workers tend to wreckage after the crash of a charter jet at New Jersey's Teterboro Airport in February 2005.
STORY HIGHLIGHTS
RELATED TOPICS

(CNN) -- A federal jury has convicted two brothers who co-founded a charter jet company on charges they broke aviation safety rules, culminating in a 2005 crash.

The jury in Newark, New Jersey, convicted Platinum Jet Management LLC founders Michael Brassington, 37, and his brother, Paul Brassington, 31, both of Fort Lauderdale, Florida, on Monday after four days of deliberations, according to a statement from the U.S. Attorney for the District of New Jersey.

The jury convicted both Brassingtons of conspiracy to commit wire fraud and to defraud the Federal Aviation Administration.

The jury also convicted Michael Brassington, the company's president, CEO and chief pilot, on six counts of making false statements, as well as lying in a National Transportation Safety Board accident report on the 2005 crash, the statement said.

He also was convicted of endangering the safety of an aircraft in flight.

Prosecutors accused the brothers and several employees of illegally operating a charter air business that flew celebrities around for as much as $90,000 a flight, according to the federal indictment.

Federal prosecutors said the company flew more than 85 times in 2002 and 2003 without an FAA charter air certificate and used unqualified and poorly rested pilots. It earned some $1 million for those flights, according to prosecutors.

In 2003, Platinum began piggybacking on another company's commercial charter license, according to prosecutors, but still failed to meet regulatory standards imposed on such operators.

Prosecutors also alleged the company dangerously overfueled planes to take advantage of low prices at some airports, a practice that investigators said contributed to a 2005 crash involving a Platinum jet at Teterboro Airport in New Jersey.

A Platinum employee told jurors that Michael Brassington gave him false information that induced him to overfuel the plane that crashed in 2005. The overfueling caused a dangerous shift in the plane's center of gravity and made the aircraft unsafe, prosecutors said.

According to a report by the National Transportation Safety Board about the accident, the aircraft ran off the end of the runway on takeoff, crashed through a fence, crossed a road -- hitting a car -- and crashed into a warehouse. The aircraft's two pilots were seriously injured, as were two occupants in the vehicle. The cabin aide, eight passengers, and one person in the building received minor injuries, the NTSB report said.

The most serious charge, endangering an aircraft in flight, could earn Michael Brassington up to 20 years in prison and a $250,000 fine.

The conspiracy convictions and false statements counts each carry a maximum penalty of five years in prison and a $250,000 fine.

The brothers will be sentenced March 17.