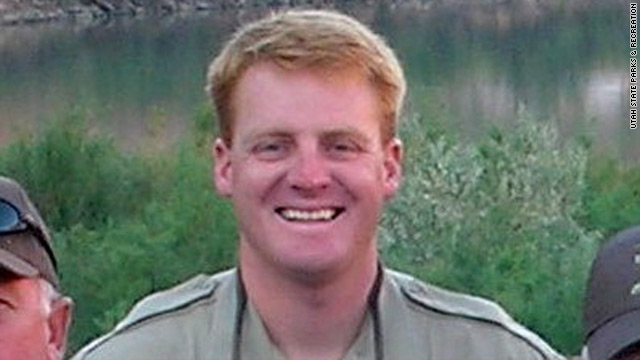 Manhunt is on for park ranger's shooter
STORY HIGHLIGHTS

(CNN) -- A rifle, backpack and part of a blood-soaked T-shirt believed to belong to a man who shot a Utah park ranger were recovered by police, Grand County, Utah, Sheriff Jim Nyland said Sunday.

The items were recovered about a mile from where investigators found a car near Moab, Utah, believed to belong to the suspect, Nyland told CNN.

Some 167 law enforcement officers from agencies ranging from the Moab City Fire Department to the FBI were on the ground as of Sunday looking for the suspect in the rugged terrain near Moab, the sheriff's office said in a press release.

"A lot of overhangs. A lot of big boulders. A lot of crevasses that a person could crawl into to get out of the weather," said Nyland.

The terrain makes searching tough, according to the sheriff, but gives authorities an advantage as it's hard for a suspect to escape from.

One of three helicopters being used in the search included thermal imaging technology, to detect a person's heat source, said Nyland. The other two flew over the Colorado and Green rivers, to make sure the suspect didn't escape by boat, according to a statement from the sheriff's office. Another allowed authorities to expand the search area to further north and west of the shooting.

In addition, search teams are "clearing all railroad freight cars" near the Intrepid Potash facility near Moab and checking the trains between that plant and Interstate 191, the sheriff's statement said.

"Doctors, family members, friends and colleagues are cautiously optimistic," she said of Young, an enforcement officer with the Utah State Parks system for more than four years.

Young was shot multiple times Friday night while on patrol on the Poison Spider Mesa Trail area. Marked by cliffs, dry canyons and rocky terrain, the Poison Spider trail is a haven for mountain bikers as well as hikers.

The ranger had stopped the man in his vehicle, then was shot in the arm, leg and stomach as the two exchanged gunfire, according to CNN affiliate KSL. He was conscious and talking to officers at the hospital, the affiliate said.

Nyland said Saturday the suspect was believed to be wounded and on foot. That same day, he said bloodhounds picked up a scent leading into an area with multiple canyons and places to hide.

Police know the suspect's identity, he said, as Young wrote the man's name and license plate number down prior to the shooting. However, authorities had not released the suspect's name as of Sunday.

Investigators have talked to the suspect's mother in an effort to determine a motive or to find out what the suspect was doing before the incident, but have not been able to discern a motive for the shooting, the sheriff said.

Nyland said investigators are confident Young shot the suspect at least once. He added Young is not thought to have provoked the suspect.

CNN's Justin Lear and Rick Martin contributed to this report.