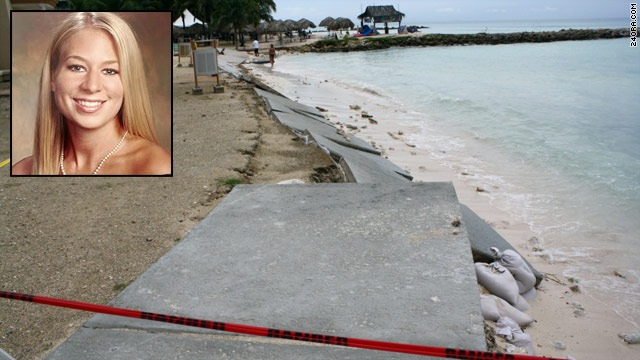 Don't miss HLN's "Nancy Grace" at 8 and 10 ET Tuesday night for the latest developments plus reaction from forensic experts on what happens next.

Oranjestad, Aruba (CNN) -- The piece of jawbone found on a beach in Aruba this month is human, but is not that of long-missing Alabama teenager Natalee Holloway, Aruban prosecutors said Tuesday.

The piece contained a wisdom tooth, and Holloway's had been removed before her 2005 disappearance, Aruba Solicitor General Taco Stein told reporters.

"Right there and then, it was obvious it wasn't Natalee," Stein said. Investigators are now trying to determine whether the bone came from any other people reported missing, he said.

The bone was found by an American tourist near the Phoenix Hotel, a resort on the western side of the island, Aruban prosecutor Peter Blanken said.

Stein said the news was "another tragedy" for Holloway's family, since it brought them no closer to learning what happened to their daughter. Holloway was 18 when she was last seen on the island.

"It's very sad for the parents to not have closure," Stein said in a later interview. "They must rest assured we are working hard to solve the case. Whether that will be in the near future, I cannot tell."

"We remain hopeful that some day we will find the answer to the whereabouts of our daughter, Natalee Holloway," he said. "Again, we want to thank everyone for their support in our efforts to find justice. We ask that you continue to remember Natalee in your thoughts and prayers."

Holloway's mother, Beth Holloway, did not immediately comment on the case, but her attorney released a statement that said she accepts the outcome.

"Beth accepts the forensic conclusions, is emotionally exhausted from the inexplicably long wait, and deeply disappointed in the time and manner in which she learned of the results," said attorney John Q. Kelly.

Investigators tested the bone at the Netherlands Forensic Institute in The Hague, Netherlands. Their job was first to determine whether it was a human or animal bone and then -- if it proved to be human -- figure out to whom it belonged.

Blanken said the bone was initially examined by a forensic expert in Aruba, who determined it was from a young woman. But Stein said the bone appeared to have been in the water "for a very long time," and it was not possible to determine whether it came from a male or a female.

Police collected a second bone Monday that had been found this month on the beach by a New Jersey family, but that one turned out to be an animal rib bone, prosecutors said.

Holloway was visiting the island with about 100 classmates to celebrate their graduation from Mountain Brook High School in suburban Birmingham, Alabama, when she disappeared. She was last seen in the early hours of May 30, 2005, leaving an Oranjestad nightclub with Joran van der Sloot and two other men.

Van der Sloot was detained twice in connection with Holloway's disappearance but never charged. He is now awaiting trial in Lima, Peru, on a murder charge in the death of Peruvian student Stephany Flores, whose body was found in a hotel room registered to van der Sloot in May. A surveillance camera captured images of the two entering the room.

Van der Sloot, 23, also faces federal wire fraud and extortion charges in the United States, where prosecutors say he demanded more than $250,000 from Holloway's family in return for disclosing the location of her body. He told Peruvian investigators that he knows where her remains can be found, but would neither identify the location nor say what happened to her on the night of her disappearance, a Peruvian police official told CNN in June.

Stein said van der Sloot remains a "person of interest" to investigators, and Aruban prosecutors have asked the FBI -- which currently has the hard drive from van der Sloot's computer -- for any information that may be relevant to Holloway's disappearance. But Aruban authorities have no plans to interview him again any time soon, Stein said.

"He has made so many statements before that have proven untrustworthy that we will not just rush to him to see about this statement," Stein said.