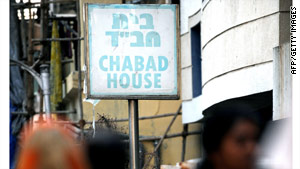 New York (CNN) -- Family members of two New Yorkers gunned down during the 2008 Mumbai, India, terror attacks are suing Pakistan's intelligence agency along with a militant organization they say are responsible for the deaths.

Rabbi Gavriel Noach Holtzberg and his pregnant wife, Rivka, were among the more than 160 people killed during the attacks.

During the incident, 10 men stormed buildings such as the luxury Taj Mahal Palace and Tower, the Oberoi-Trident hotels, a train station and a Jewish cultural center.

The only surviving gunman, Mohammed Ajmal Kasab of Pakistan, was convicted of murder, conspiracy and waging war.

The Pakistan-based militant group Lashkar-e-Tayyiba, which has been blamed for the November 2008 siege, is also named in the suit.

Family members are seeking monetary damages but did not specify an amount.

The families' lawyer, James Kreindler, was part of a successful lawsuit against Libya in connection with the 1988 explosion on Pan Am Flight 103 that killed 259 people over Lockerbie, Scotland, as well as 11 people on the ground.