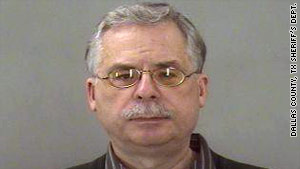 (CNN) -- A Catholic priest, facing criminal charges and a lawsuit alleging that he sexually abused a teenage boy, is now charged with attempting to hire someone to kill the youth, authorities said Tuesday.

The Rev. John M. Fiala was in the Dallas County, Texas, jail on Tuesday, charged with one count of criminal solicitation to commit capital murder, according to the Texas Department of Public Safety and the jail's website. He also is charged with two counts of aggravated sexual assault of a child. His bail totals $700,000.

Fiala, 52, of Dallas, was out on bond on other sexual assault charges involving the youth, now 18, when he allegedly attempted to negotiate the boy's murder, said Tom Rhodes, the teen's attorney.

He was arrested last week after he offered an undercover agent with the Texas Department of Public Safety $5,000 to kill the teen, according to department spokeswoman Lisa Block.

A call to Rex Gunter, the defense attorney listed in jail records for Fiala, was not immediately returned Tuesday.

The youth met Fiala in 2007, according to Rhodes. The attorney said the priest started "grooming him," buying him gifts including a computer and a car. In early 2008, when the boy was 16, under the guise of providing private catechism lessons, Fiala "gained access to him and began to sexually abuse him once or twice a month, including on church grounds," Rhodes said.

At the time, Fiala was administrator of Sacred Heart of Mary in Rocksprings, Texas, which is in Edwards County. The alleged abuse occurred in two counties -- Edwards and Howard -- and included the youth's rape at gunpoint, the attorney said.

The teen, after struggling with the abuse, told a school counselor, who notified authorities, Rhodes said. He filed suit in April against Fiala, as well as the archdioceses of San Antonio, Texas, and Omaha, Nebraska -- where Fiala was before Texas -- and Fiala's religious order, the Society of Our Lady of the Most Holy Trinity, the attorney said.

The suit claims that all three covered up Fiala's record of abuse. All three have denied doing so, according to the San Antonio, Texas, Express-News. When former San Antonio Archbishop Jose Gomez and the religious order learned of the police investigation into Fiala's relationship with the teen, he was removed from active ministry in October 2008, the newspaper reported.

In September, an Edwards County grand jury indicted Fiala on three counts of aggravated sexual assault of a child and one count of aggravated sexual assault by threat, according to the Express-News. Fiala was arrested in Kansas by a fugitive task force and was extradited to Texas, where he posted bail on September 27, according to the newspaper. He then moved to Dallas County.

A grand jury in Howard County handed up an indictment last week on the two aggravated sexual assault charges, the Express-News said.

Meanwhile, "approximately a week ago, we got an anonymous phone call from someone saying, 'Look, I'm living in a building with this guy, and he's talking about killing this young man,' " Rhodes said. "Our response was, 'You need to call police.' "

Letsinger said he got a call November 11 from the neighbor. The man at first just told authorities they should "be looking at this guy," the sheriff said, but later said Fiala had offered him $5,000 to kill the teenager. The allegation surprised him, Letsinger said.

The Department of Public Safety and its Texas Ranger Division got involved, sending the undercover agent to speak with Fiala, Rhodes said. The conversation was caught on video and audiotape.

Rhodes said his client was relieved to hear of Fiala's arrest. He was attending college but had to withdraw and be spirited away somewhere safe because of the threats, he said.

"He's still very afraid, but he is hoping that this time Fiala will stay behind bars," Rhodes said.

A hearing on the lawsuit was held Monday, he said. The Omaha diocese had argued it should be sued in Nebraska rather than Texas. The judge rejected that argument, Rhodes said.

"I think he's cooked his goose now," Letsinger said of Fiala. "We know that pedophiles sometimes threaten their victims to keep them quiet. But this is kind of an older victim, and you wonder sometimes why they wouldn't come forward. ... I can see now the evil in this guy is pretty bad."