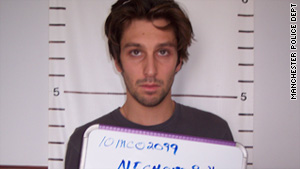 (CNN) -- A 24-year-old Vermont man was fatally shot by a friend who used a gun in a prank, police said.

The alleged shooter apparently tried to prank his sleeping friend by waking him up with the loud sound of an air rifle, police said.

However, police said, the man mistakenly used a real rifle in the prank.

Nicholas Bell, 23, was charged with manslaughter after the incident Thursday, Manchester police said.

"The accused fired the weapon, which was a loaded .22 cal rifle hitting the [victim] in the chest," a police statement said. "The victim died at the scene."

The victim was identified as 24-year-old Jeffrey Charbonneau.

Both men were guests at the Manchester home where the shooting occurred, police said.