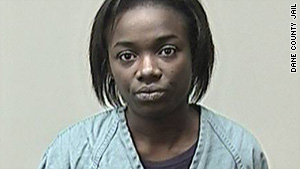 (CNN) -- A Wisconsin woman who cut in front of a long line of Black Friday shoppers was arrested, police say, after she allegedly threatened to shoot those she moved ahead of.

Lanessa L. Lattimore, 21, attempted to cut in front of a line of "several hundred shoppers" at a Toys R Us store in Madison, Wisconsin, on Thursday, according to a Madison police report.

"She was confronted by numerous shoppers and in turn she made threats to retrieve a gun and shoot the shoppers," the report said.

Police arrested Lattimore for disorderly conduct and took her to Dane County Jail, the report said, adding that no gun was found at the scene.

Lattimore admitted there had been a confrontation in the line but disputed that she threatened to shoot anyone, contrary to the Madison police report.

"Everybody was cutting in line," she told CNN. "... I'm not a violent person, but police charged me with disorderly conduct."

She added, "I just wanted to get my daughter the toy that she wanted for Christmas, which probably won't be there when I go today."

The store opened at 10 p.m. Thursday for Black Friday shopping, which often draws huge lines of customers searching for bargain deals during what is traditionally viewed as the start of the Christmas shopping season.

"We have 600 stores across the country and we take security very seriously," said Toys R Us spokeswoman Kathleen Waugh. "Our people go through training, we have police nearby, and we only let a certain number of people into our stores. This is an isolated incident."