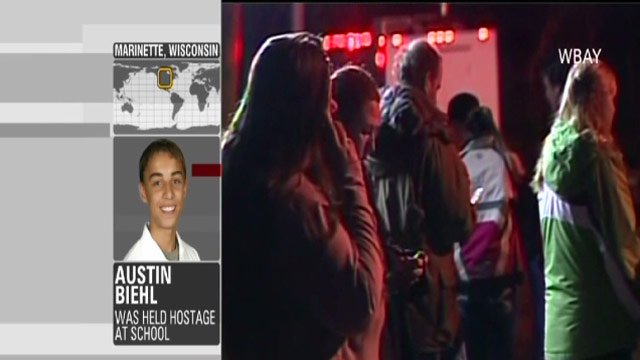 (CNN) -- A 15-year-old sophomore who held his classmates and a teacher hostage for about five hours Monday at his northeast Wisconsin high school, and then turned one of his guns on himself as police approached, died on Tuesday, police said.

Hengel shot himself as police broke into the Marinette High School classroom after hearing gunshots Monday night. He initially was taken to a Marinette hospital and later was transferred to Green Bay, Skorik said.

All the hostages were unharmed. Skorik said Tuesday that police are still trying to determine a motive, saying the student was well-liked, had no prior law enforcement contact and "was a good student." Authorities interviewed Hengel's parents Monday night, he said.

"I was unaware of any problems with this particular student," said Principal Corry Lambie. "He was a student in good standing."

"We may never truly know why this happened," Marinette County District Attorney Allen Brey told reporters. He pledged to provide a complete report on the incident.

Authorities lauded teacher Valerie Burd for helping keep Hengel and the other students calm and potentially saving lives. The students themselves also were commended, with police saying they attempted to engage Hengel in conversation and keep him from becoming agitated.

"Five or six" shell casings from both of Hengel's weapons -- a .22-caliber semi-automatic and a 9 mm semi-automatic -- were found in the classroom, Skorik said. Bullets for those weapons also were found in Hengel's pocket at the hospital, and a duffel bag left in the classroom contained "numerous live rounds," he said. A bomb squad was called in to X-ray and remove the bag, Skorik said.

A knife also was recovered, but it was unclear whether it was in the bag, police said.

Police entered the classroom, on a below-ground level, after hearing three gunshots Monday. However, based on witness accounts as well as the shell casings, authorities believe Hengel also fired the weapons "prior to police arrival and prior to the school being aware of the situation," Skorik said.

It appeared the student did not aim at anyone, however, he said. Bullet holes were found in a desk and in some audio-visual equipment in the classroom.

Police initially said the student was thought to have taken over the classroom before school ended about 3:10 p.m. But Skorik said Tuesday authorities think the student entered the class for "sixth hour" about 1:30 p.m. and took it over then, firing the first shots -- which apparently went unheard outside the room -- sometime after that.

Officials believe Hengel did not bring the duffel bag into class, but asked to use the bathroom, then went to his locker and retrieved it, said school Superintendent Tim Baneck.

The student prevented anyone from leaving the room and would communicate only with police via the teacher, Skorik said.

Hengel apparently ordered that everyone give up their cell phones. The teacher used a land line telephone in the classroom to communicate with hostage negotiators, Lambie said.

He said he was alerted to a possible problem when a parent came to the school and said his daughter had not responded to repeated calls to her cell phone. The office called Burd's classroom on the land line. Burd answered and was told the student's parent was trying to reach her.

Students safe after hours of terror

Lambie said he and his assistant principal went to Burd's classroom about 3:45 p.m. The door was locked, and the room was dark, he said. Lambie said he used his key to open the door and took a couple of steps inside. As he did, the female student whose parent had come to the school left without incident, he told reporters. But Hengel pointed the gun at him and told him to leave, Lambie said. He did so, and called 911.

The girl's departure left 24 hostages still in the classroom, Lambie said. Hengel released five others about 7:40 p.m. after they used the bathroom, police said.

Students coming to the classroom for their seventh-period class saw a note posted on the door directing them to report to the library, Baneck said.

At 8:03 p.m., police positioned outside the classroom heard three gunshots and went inside the room. They confronted the suspect, who then fired one shot at himself. He was treated by medical personnel at the scene before being transported to the hospital.

Skorik told reporters that as the incident drew to a close, the suspect received a call and became "agitated." He did not know who had called him.

The remaining hostages, including Burd, then were put on a bus and brought to the courthouse to be reunited with their families. Parents had gathered in the jury assembly room along with counselors, police and school officials, Skorik said.

Witnesses told police that the suspect was communicating with other students, and "the dialogue at times, I'm told, was light," Skorik said. "There were just general discussions, as far as we've gathered to this point. There was nothing specific identified by the hostage-taker as far as his reasoning behind holding those children in the class with a firearm."

At other times during the ordeal, the suspect was described as being "quiet and sullen," the police chief said. He made no demands or requests of authorities during the incident.

Follow-up interviews with the students, Burd and others were under way Tuesday, officials said.

The school was closed Tuesday. Baneck said Monday that school officials were working to make counselors available to students and others affected by the incident. Officials plan to reopen the school Wednesday, officials said.

Authorities were attempting to determine where the teen got the weapons and how he managed to get them into the school, Skorik said.

Baneck said school officials would review the incident and ask if anything could have been done differently. "If there are some things we could improve upon ... you can be assured we will be implementing that," he said.

Marinette, a town of about 11,600 residents, borders Lake Michigan about an hour's drive north of Green Bay, Wisconsin.

Marinette High School has about 700 students in grades nine through 12, Baneck said.