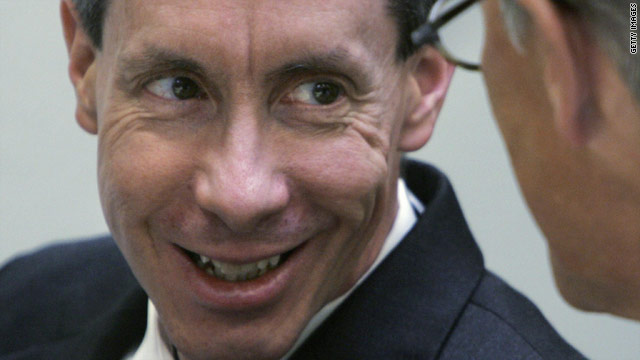 Warren Jeffs smiles as he talks with a lawyer during an earlier trial in Arizona.
STORY HIGHLIGHTS

(CNN) -- After a legal battle that wound up before the Utah Supreme Court, polygamist sect leader Warren Jeffs was extradited from Utah to Texas to stand trial on sexual assault and bigamy charges, according to authorities in both states.

The Texas attorney general's office issued a statement saying that Jeffs arrived in San Angelo, Texas, at about 9 p.m. Tuesday.

"Law enforcement officers with the Texas Rangers and the Texas attorney general's office escorted Jeffs to the state after taking custody of him in Utah earlier in the day," the statement said. "Jeffs is currently being held without bail and awaits trial in Texas on two charges of sexual assault of a child and bigamy."

Jeffs was set to appear in Tom Green County Court at 11 a.m. (noon ET) for arraignment, according to the court administrator's office.

The Utah Court of Appeals halted Jeffs' extradition while it considered his appeal of the extradition order, then transferred the matter to the Utah Supreme Court. That court on November 23 dismissed the appeal, clearing the way for the extradition to proceed.

In July, the Utah Supreme Court overturned Jeffs' conviction in that state on two counts of being an accomplice to rape, ruling that instructions given to jurors were erroneous.

Jeffs, leader and "prophet" of the Fundamentalist Church of Jesus Christ of Latter-day Saints (FLDS), was accused of using his religious influence over his followers to coerce a 14-year-old girl into marrying her 19-year-old cousin. He was sentenced to two consecutive prison terms of five years to life in Utah.

Utah Gov. Gary Herbert signed an extradition warrant in August at the urging of Texas Gov. Rick Perry. Jeffs' attorneys filed the motion for a stay in October, saying Utah "is punting, using the [Uniform Criminal Extradition Act] as an offensive line to protect its weakened prosecution, buying time until it can figure out what to do next in its now frantic effort to defeat Mr. Jeffs and the unpopular religion he represents."

The defense argued that the Interstate Agreement on Detainers -- a federal law under which a state can obtain custody of a person even if the person is already incarcerated in another state -- does not apply to Jeffs, saying his status changed with the Utah Supreme Court ruling and he is now presumed innocent in Utah. Defense attorneys said extraditing him would violate his constitutional rights.

Critics of the FLDS say young girls are forced into "spiritual" plural marriages with older men and are sexually abused. Sect members have denied that any sexual abuse takes place.

In June, a judge in Arizona dismissed charges against Jeffs after the Mohave County prosecutor requested it, citing the "much more serious charges" against him in Texas. Jeffs had been charged in Arizona with four counts of being an accomplice to sexual conduct with a minor.

If convicted of the Texas charges, Jeffs would face a maximum sentence of up to 99 years in prison.

To date, seven of 12 suspects connected to the Yearning For Zion ranch have been convicted of sexually assaulting children, according to the Texas attorney general's office.

In Session's Carol Gantt contributed to this report.