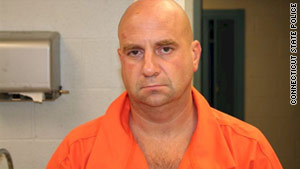 Steven Hayes' lawyer said Hayes was actually pleased with the jury's recommendation that he should be put to death.
STORY HIGHLIGHTS

(CNN) -- A man convicted of a brutal 2007 home invasion in which a Connecticut mother and her two daughters were killed was sentenced to die for the crime Thursday.

New Haven Superior Court Judge Jon Blue imposed the death sentence agreed upon last month by jurors. Jurors in October convicted Steven Hayes, 47, of 16 of the 17 charges against him, including murder, capital murder and kidnapping. Jennifer Hawke-Petit, 48, died as a result of the home invasion, along with her daughters, 17-year-old Hayley Petit and 11-year-old Michaela Petit.

"This is a terrible sentence," Blue told Hayes. "But in truth, it is a sentence you wrote for yourself in flames on July 23, 2007."

Prosecutors alleged that Hayes and co-defendant Joshua Komisarjevsky invaded the Petit home in Cheshire, Connecticut, beat and tied up Dr. William Petit, raped and strangled Hawke-Petit, molested one of their daughters and set the house on fire before attempting to flee.

The two daughters, who had been tied to their beds, died of smoke inhalation. Petit escaped to a neighbor's home. Hayes also forced Hawke-Petit to go to a bank and withdraw $15,000 from an account after finding evidence the account held between $20,000 and $30,000, authorities said. Komisarjevsky is to be tried separately later.

At least four jurors were in the courtroom for the sentencing. Before it was pronounced, the court heard emotional impact statements from relatives of the three victims including William Petit as photos of the family were projected onto a screen.

In his remarks, which brought many in the courtroom to tears, Petit said the impact of the crime on his family was akin to "a bomb going off in your house."

He said he would always remember his father's face when he asked him about the girls. "He just shook his head from side to side and sobbed ... Our home was no more."

Hayes told the court in his statement that death "will be a welcome relief."

"I am deeply sorry for what I've done," he said. "... I stand before the court as Steven Hayes, convicted murderer, but that is not the real Steven Hayes." He acknowledged he "destroyed innocent lives and took away a family. I did what I did, and live with it ... I was an out-of-control train destined to crash. The death I wanted was my own, not the death of others."

Hayes was also seen looking at the photographs of the family. "I think he knows the devastation that he caused," defense attorney Thomas Ullmann told reporters afterward. Ullmann earlier had told jurors that in recommending Hayes die for his crimes, they would be providing him with what he wanted, saying life in prison without parole would be a greater punishment.

Ullmann said Thursday he thought it was a "barbaric sentence." "In my lifetime, I hope I never stand next to another person getting sentenced to death," he said.

Blue gave Hayes an official execution date of May 27, 2011. However, that date is a formality, he acknowledged. In reality, unless Hayes chooses to waive some or all of his appeals, it could be decades before he is put to death.

Petit told the court that following the crime, he lost all interest in practicing medicine. At first, he was unable to sleep; given medication to relieve his insomnia, he had nightmares, he said. His vision was impaired by the blows to the head he suffered, which also caused balance and vertigo problems. "I seriously considered suicide many times," he said. "No wife, no children, no home."

He called his wife "the spiritual anchor of our family" and "my best friend," adding that she taught him about prayer. He said when he saw the video of his wife at the bank for the first time, "I saw the strain on her face ... but I suspect she was praying."

He also spoke about his daughters, recalling how pleased he was when Hayley told him she wanted to major in biology so that she, too, could go into medicine. "I grieve," he said, "because she never got to love somebody for a long time." After that sentence, he paused for several minutes to compose himself, then went on to note that his elder daughter was a "hard worker, honest and very brave." She raised $55,000 for multiple sclerosis research after Jennifer Hawke-Petit was diagnosed with the disease, he said.

Petit remembered Michaela, or "K.K." as her family called her, as a gifted cook who loved to help him in the garden.

"I miss my entire family, everything we had together," he said. "... They were three special people. My children were my jewels." He said he will never get to walk his daughters down the aisle, or meet his grandchildren. Now, he said, he is left to deal with "a giant hole in the universe, in my heart."

His only hope, he said, is for justice to be served. "Evil does exist, and it can strike at any time ... Evil is among us, and we need to rid the world of it."

Earlier, Jennifer Hawke-Petit's younger sister, in an impact statement recorded on DVD, said, "You felt it was your right in life to take what others had." Cynthia Hawke-Renn recalled looking to her sister for guidance and advice. "You stole from all of us," she told Hayes. "You interrupted our cycle of life."

The girls' grandfather, William Petit Sr., recalled his anguish at learning of the deaths, choking back tears as he spoke of trying to call his son's home on the morning of July 23 and hearing Hawke-Petit's voice on the answering machine. It was, he said, "the last time I heard her voice."

If Hayes is executed he will die peacefully, without difficulty breathing, anxiety or pain, Hawke-Renn said, according to a copy of her statement posted on the Hartford Courant newspaper's website. "I would have given anything for my loved ones to have died in this same peaceful manner," she said.

"Steven Hayes has no empathy," said Johanna Petit Chapman, William Petit's sister. "... He has no remorse; the only thing he's sorry about is that he got caught." The murders were so heinous, she said, that "the state of Connecticut was aghast."

"Some people are so evil that they do not deserve life," she said, "and Steven Hayes falls into that category."

The deaths shocked the affluent Connecticut suburb of Cheshire, where Petit is a prominent endocrinologist. His wife was a pediatric nurse who did not let multiple sclerosis keep her from working or raising a family. Hayley Petit had just graduated from Miss Porter's School, a prestigious private school that counts Gloria Vanderbilt and Jackie Kennedy among its alumnae.

The deaths also led to a public outcry for Connecticut to strengthen its laws against repeat offenders when it was learned that the suspects had previously been convicted of multiple felonies. Citing the Cheshire case, Gov. M. Jodi Rell vetoed a resolution that would have eliminated the death penalty in the state.