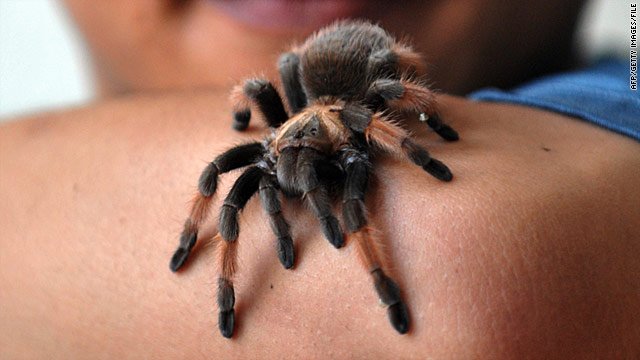 The Mexican red-kneed tarantula is protected under an international treaty and can only be traded with special permits.
STORY HIGHLIGHTS
RELATED TOPICS

Los Angeles (CNN) -- A German tarantula dealer has been arrested on charges of illegally sending hundreds of the spiders to the United States through the U.S. mail, law enforcement officials said.

Sven Koppler, 37, who had just flown into in Los Angeles, was arrested Thursday after a nine-month investigation dubbed "Operation Spiderman," authorities said.

Koppler will remain jailed until a bond hearing December 8, authorities said. A preliminary hearing is scheduled for December 17 and arraignment is December 20.

Deputy Federal Public Defender Neha Mehta told CNN "it is very early in the case" and that she could not comment.

Koppler faces one count of illegally importing wildlife into the United States, the U.S. attorney's office for the district said in a news release. He failed to receive permits and did not declare the spiders, attorney's office spokesman Thom Mrozek told CNN.

Special agents and inspectors with the U.S. Fish and Wildlife Service and the U.S. Postal Service began to investigate Koppler's shipments last March, according to the release.

Of the more than 600 tarantulas under question, some were of the Brachypelma smithi species, commonly known as Mexican red-kneed tarantulas. This species is protected under an international treaty and can only be traded with special permits.

Koppler failed to declare to the Fish and Wildlife Service that he had shipped the tarantulas and that is why they are considered smuggled, Mrozek said.

If convicted, Koppler could be sentenced to up to 20 years in federal prison and fined $250,000, prosecutors said.

The Brachypelma genus of spiders is protected by the Convention on International Trade in Endangered Species. Specimens can be legally traded only if permits are first obtained from the exporting country, the news release said.

According to the criminal complaint, Koppler mailed more than 500 tarantulas. Many were wrapped in colored plastic straws. Agents made subsequent undercover buys from Koppler, the attorney's office says. Koppler received about $300,000 as a result of tarantula sales around the world, according to the release.

Michael Sheller, who owns Vogelspinnen, a tarantula clearinghouse in Sprendlingen, near Frankfurt, Germany, said Koppler is a well-known and highly respected man in the tarantula business.

"He is a very reputable dealer," said Sheller. "I am shocked, I know him very well."

Sheller, who exports hundreds of tarantulas each year, said it is important to follow the shipment rules. He said his biggest customers are in the United States.

"Tarantulas are fascinating" Sheller said. "I make my living off of them."