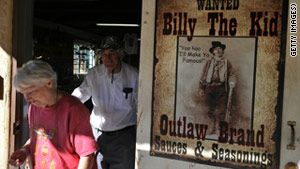 New Mexico Gov. Bill Richardson has until Friday to decide if he will issue a pardon for Billy the Kid.
STORY HIGHLIGHTS
RELATED TOPICS

(CNN) -- The governor of New Mexico has until Friday to decide whether to pardon one of the West's most infamous outlaws in the killing of a law enforcement officer.

Gov. Bill Richardson received 809 responses on a special website dedicated to answering a generations-old question: Should Billy the Kid get a pardon in the killing of a sheriff?

Richardson, a Billy the Kid buff, is looking at an old promise by another governor, and not the Kid's cold-blooded reputation, in deciding whether to issue a posthumous pardon, officials said.

"I think he will take the responses into account, particularly the learned responses," said Richardson's deputy chief of staff, Eric Witt.

Some 430 people were in favor of the pardon while 379 were against it, Witt said Wednesday.

The governor must make his decision by late Friday, when his term ends.

Billy the Kid, who was born Henry McCarty but was also known as William H. Bonney and Henry Antrim, died at the hands of another sheriff, Pat Garrett, when he was only 21.

Some members of the Garrett family, including grandson Jarvis Patrick Garrett, oppose the pardon. Besides arguing that Billy the Kid was an incorrigible killer, they want to make sure Pat Garrett is absolved of any wrongdoing related to the killing and a Bonney jail escape.

But Witt said the governor will not do anything that casts a cloud on Pat Garrett. "We consider Pat Garrett a true hero of the West."

Some residents, including Gov.-elect Susana Martinez, said there are more pressing issues facing the state, but Witt said Wednesday that the pardon consideration "hasn't take away from our attention to them."

Albuquerque defense attorney Randi McGinn, who volunteered to handle the case for free, filed the petition for the pardon. "A promise is a promise and should be enforced," she wrote.

Garrett killed Bonney on July 14, 1881, in Fort Sumner weeks after Bonney escaped from a jail. The sheriff, legend has it, was hiding in the dark and shot the Kid when he entered a room. Garrett was gunned down in 1908 at age 57.

Richardson will be deciding only the matter of a promise to Bonney made by territorial Gov. Lew Wallace, Witt said. "We're not offering a blanket pardon for everything he did."

Wallace -- who had also been a Union general in the Civil War and wrote the novel "Ben-Hur" -- had promised to grant Bonney amnesty for the fatal shooting of Lincoln County Sheriff William Brady and other "misdeeds" if he agreed to testify before a grand jury investigating another murder. Bonney cooperated, but the pardon didn't happen.

According to Mark Lee Gardner and other historians, Bonney at one point wrote to Wallace, asking him to honor the deal.

The Garretts argue Bonney decided to flee house arrest, making the pardon moot. He eventually was convicted in Brady's death and was sentenced to death, the petition states. But he escaped from jail on April 28, 1881, killing two deputies.

"Still, regardless of Billy's crimes, the motives of Richardson or the hollowness of posthumous justice, it all comes back to Wallace's promise. A deal is a deal, and 129 years doesn't change that. Billy is owed a pardon," Gardner wrote earlier this year in the Los Angeles Times.

The Garretts don't buy that argument.

"If Billy the Kid was living amongst us now, would you issue a pardon for someone who made his living as a thief and, more egregiously, who killed four law enforcement officers and numerous others?" the Garrett family wrote Richardson last fall.

J.P. Garrett said there is no written proof that Wallace made the promise and noted that the charges were federal, which did not give the governor the right to make the offer.

But McGinn said a written promise is not necessary and there is ample evidence and letters indicating it was made. And, she said, Bonney was convicted of state charges after federal ones were dismissed.

Wallace's great-grandson, William Wallace, also opposes the pardon for some of the same reasons. Like Garrett, Wallace said a pardon would possibly dishonor his ancestor.

Witt says that Richardson does not challenge Wallace's integrity. "We are strictly concerned with the application of executive power, with any commitments made on behalf of the then-territory and now state of New Mexico, and with the equal application of the law," Witt told CNN.

Popular history has Bonney gunning down 21 men, but many historians say the number was closer to nine. According to other legends, Bonney did not die at Garrett's hands and is not buried in Fort Sumner, New Mexico. He went to Texas and became known as "Brushy Bill" Roberts, they say.

They asked Richardson to sign a petition signed by 100 people that reads, "Whereas we the undersigned accept and agree the traditional history of Sheriff Pat F. Garrett and Billy the Kid (William Bonney), and believe that Billy the Kid died at Pat F. Garrett's hand; Therefore we oppose a postphumous (sic) pardon for Billy the Kid as Brushy Bill Roberts."

But McGinn said Bonney kept his bargain by testifying and should receive the pardon. The attorney said at least two killings attributed to Bonney were self-defense and five others could have been done by others. Evidence shows that "it's ambiguous here who were the bad guys and who were the good guys."

"Governor Wallace did not keep his end of the deal, which was to pardon Mr. Bonney for all outstanding charges, including the pending indictment related to the death of Sheriff William Brady," McGinn wrote last week. "This injustice should be corrected."

"Why would he (Bonney) surrender himself ... unless there was something in it for him?" McGinn asked.