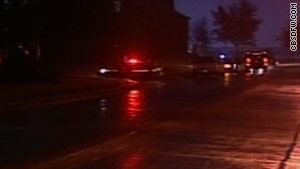 An Arlington, Texas, police officer was killed while responding to a domestic assault call.
STORY HIGHLIGHTS

(CNN) -- An Arlington, Texas, police officer was among three people killed in a shooting at an apartment complex Tuesday night, officials said.

It was at least the second fatal shooting in two days of a law enforcement officer in the United States.

On Monday, a Georgia state trooper was fatally shot after a traffic stop in northwest Atlanta.

In the Arlington incident, the officer had been dispatched to an apartment complex to check out a report of domestic assault, city spokeswoman Tiara Richard told reporters.

"Shortly afterwards, officers received a call of a shooting at the same location. When officers arrived, they found three people deceased here in an apartment at the complex. One of those people was an officer," she said.

Authorities did not immediately release the name of the victims.

"It's a tragic situation. Our hearts are broken tonight," Mayor Robert Cluck said in a statement.

Officer killed after responding to call

In January, another Arlington police officer died in the line of duty, Richard said.

Officer Craig Story was killed when his motorcycle struck a school bus about a mile away from Tuesday's shooting scene, CNN affiliate WFAA reported.

"It's hard on the city as a whole. These are people who day in and day out, they go out and do their job and they are doing it to protect the citizens here. It's a hard loss for anyone...especially during this time of year."

Meanwhile, Georgia officials have arrested a suspect in the fatal shooting of the state trooper late Monday.

Trooper Chadwick LeCroy, 38 was shot twice in the face following the traffic stop and he died en route to a hospital, a state patrol spokesman said.

The suspect escaped in the trooper's patrol car, which was found abandoned about half a mile away. Shortly afterward, he was taken into custody, the spokesman said.