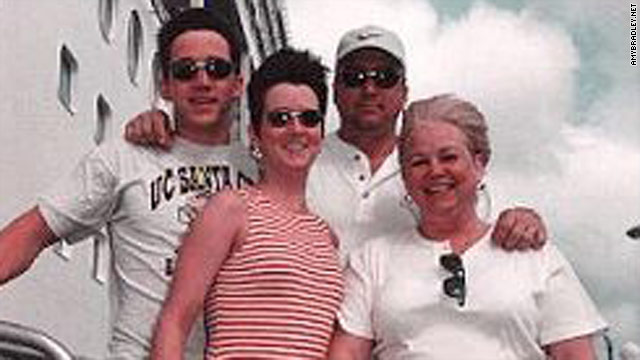 Amy Lynn Bradley, second from left, shown with her family on the cruise ship "Rhapsody of the Seas," vanished as the boat docked in Curacao.
STORY HIGHLIGHTS

(CNN) -- If the human jawbone that washed up on a beach in Aruba late last year wasn't Natalee Holloway's, whose was it?

Authorities continue to investigate. They say the jawbone is human and likely was from a Caucasian. It held a single tooth.

Ten people have vanished while vacationing in the Caribbean in the last 15 years, according to the Aruba Missing Persons website. One of them was Amy Lynn Bradley, then 23, who disappeared 12 years ago while on a vacation cruise with her family.

Bradley and her mother, father and younger brother were on board the cruise ship "Rhapsody of the Seas." The ship had just left Oranjestad, Aruba, and was heading to Curacao, in the Netherlands Antilles, on the day she went missing -- March 24, 1998.

Bradley left her cabin early that morning, barefoot and carrying her cigarettes and lighter. It appears that she vanished while the ship was docking in Curacao.

The last person to see Bradley, according to her family, was her father, at about 5:30 a.m. Earlier, she had been with members of the cruise ship's band, "Blue Orchid." 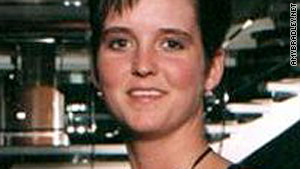 Amy Bradley had a new job and a new dog, Daisy, waiting for her at home in Virginia, her family says.

Band member Alister Douglas, who goes by the moniker "Yellow," told CNN that Bradley joined band members for a drink at the ship's dance club after the band's performance. He said he parted with Bradley at about 1 a.m. and headed to the staff elevator. She went off in another direction, he said, but did not see where she went.

He recalled that he was awakened in his room at about 6 a.m. by a cruise line manager, who asked if Bradley was with him. Investigators searched his room, and those of his band mates later that day, but nothing was found, he said.

Bradley's family insists she had no reason to run off. She was planning a life back in Virginia, with a new job and a new home. She has no history of running away and would never abandon her family or pet bulldog, Bailey, the Bradleys said.

Did she fall overboard by accident? Could foul play be involved? Was she kidnapped by someone she encountered on the ship's deck? Did she get into a violent argument with someone?

The Bradleys say they have received no answers from authorities in Curacao and Aruba.

Ron and Iva Bradley said in a statement to CNN: "We believe that our daughter is alive, but being held captive by someone." They say they had a sighting in 2005 they believe was credible, when a witness said he saw their daughter in a department store rest room in Barbados.

Royal Caribbean International Cruise Lines, which owns "Rhapsody of the Seas," did not respond to CNN's request for comment, and authorities in Aruba and Curacao would say only that their investigations remain open.

The Bradleys' complaint that that no one looked closely at their daughter's disappearance echoes the complaints during the early days of the Natalee Holloway investigation.

Holloway's parents also complained of a lack of urgency by the authorities when she disappeared during a senior class trip to Aruba in May 2005. To this day, authorities have no resolution as to what happened to Holloway five years ago.

A local man, Joran van der Sloot, who was last seen with Holloway, was arrested and questioned several times. He was released and since has been arrested and charged with murdering a young woman in Peru.

At the time she disappeared, Bradley was 5'7" tall, weighed 120 pounds and had short brown hair and green eyes. She had a Tasmanian Devil tattoo on her left shoulder blade, a Chinese symbol tattooed on her right ankle, a green and blue gecko lizard tattoo around her navel, navel ring and multiple ear piercings.