Is the fat acceptance movement bad for our health? 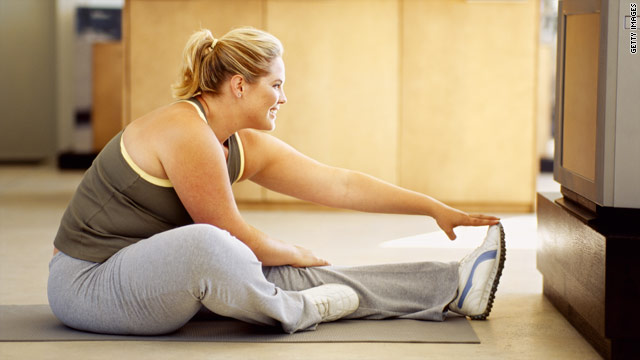 Many organizations and businesses are championing a new definition of beauty -- one that is not dictated by waist size -- but is that message undermining our health and allowing overweight people, most of whom are not healthy, to become complacent?
STORY HIGHLIGHTS
RELATED TOPICS

(Health.com) -- Deb Lemire has always been "short and square," a figure she inherited from her grandmother and passed on to her child. So when Lemire took her daughter in for a wellness visit and the well-meaning pediatrician pulled her aside to talk about her daughter's weight, the 47-year-old burst into tears "because I was the 10-year-old being told I was overweight."

She took her daughter to a nutritionist, who said her dietary habits were good. So Lemire decided not to push the issue. "I have spent my whole entire life dieting and feeling like my worth was attached to my weight," says Lemire. "I wasn't going to tell her she has to change who she is. But we're going to encourage healthy behaviors [and] not worry about translating that into a size that's 'OK.' That message is not going to come from me -- she'll get that enough from other people."

Lemire also happens to be president of the Association for Size Diversity and Health, a group that advocates that people can be healthy at any size. Her group is just one of several in a growing trend sometimes called the fat acceptance movement.

From the Dove Campaign for Real Beauty, which portrays underwear-clad women who tend to be larger than the average model, to the National Association to Advance Fat Acceptance, which fights size discrimination, many organizations and businesses are championing a new definition of beauty -- one that is not dictated by waist size.

Although most people agree that promoting super-skinny models as the feminine (or masculine) ideal isn't healthy, will the opposite -- accepting that being overweight or obese is fine -- undermine the progress being made toward heart health?

In fact, experts have recently found that the decades-long efforts to limit one serious heart risk -- smoking -- is expected to pay off with longer life spans. Unfortunately, the rise in obesity will likely undercut that progress.

Can you be fat and fit?

Expert opinion is pretty much unanimous: Being overweight is bad for your health, particularly for your heart.

"Obesity is probably the only risk factor that has such a global negative impact on so many risk factors for the heart," says Barry Franklin, Ph.D., the director of the Cardiac Rehab Program and Exercise Laboratories at William Beaumont Hospital in Royal Oak, Michigan.

Health.com: How to look 10 years thinner

However, research conducted by Steven N. Blair, a professor at the Arnold School of Public Health at the University of South Carolina, suggests that some people can be overweight and healthy. In a 2007 study, he and colleagues found that unfit people over age 60 who were of normal weight had higher mortality rates during the 12-year study than people the same age with higher body-mass indexes (BMIs) who were fit (as measured by a treadmill test).

And a 2008 study found that the location of fat deposits on the body is a big factor in the health risks associated with being overweight. (Belly fat and fat deposits in the liver are bad news.)

Franklin says that studies have indeed shown that fit overweight or obese people have cardiovascular mortality rates that are lower than thin, unfit people.

Michelle May, M.D., the author of "Eat What You Love; Love What You Eat: How To Break Your Eat-Repent-Repeat Cycle," says, "We use obesity as a marker of whether someone is practicing a healthy lifestyle, but that is not a way of determining if they are making healthy eating choices, are physically active, or have economic, emotional, and social stability, which is important to longevity."

Health.com: Are you fit enough to run?

May, who is a member of the Association for Size Diversity and Health, says, "It is easy to use a BMI and place everyone in the same box, but it is too simplistic and is not always an accurate description of someone's health."

But are such studies just an excuse for overweight people -- most of whom aren't fit -- to remain complacent about excess weight? There remains concern on the part of physicians that the rise in fat acceptance is an unhealthy trend.

Franklin says that people who are overweight or obese already have one strike against them in terms of heart health, and need to compensate by monitoring other factors like exercise, blood pressure, and blood sugar.

"I don't want to take on any specific organization...but a social movement that would suggest healthy at any size in many respects can be misleading," Franklin says. "We can't say that every overweight person is healthy."

Is body image as important as health?

May says she is concerned about contributing to fear and shame within a group for which the medical community has few available solutions.

"Where else in medicine do we offer a solution -- dieting -- that is going to fail and then point to the end user and say, 'You are weak-willed; you don't have enough willpower'?" she asks. "I know many thin people who don't exercise and follow unhealthy diets."

Part of the problem is that even when people -- or their kids -- are overweight or obese, they don't think they are. In fact, 8 percent of obese people think they are healthy and don't need to lose weight (even though 35 percent of those people have high blood pressure, 15 percent high cholesterol, and 14 percent diabetes), according to a study of nearly 6,000 people presented in November 2009 at the American Heart Association meeting.

It's not clear why there's a disconnect. But with the rise in obesity, people may have a skewed perception of a "normal" weight. Right now, more than 60 percent of American adults are obese or overweight. (This map shows the states with the highest percentage of overweight people.)

Lemire and May believe that the focus should be placed on an individual's health as much as his or her weight, and that people can make great strides just by taking small steps toward improvement.

"I think it's a given that we understand physical activity is good for your body," Lemire says. "Most people find that when they are more physically active, it makes us feel better and makes the machine run better. But we shouldn't be promoting it just on the backs of fat people."

However, people who don't think they have a health problem may be less likely to exercise, visit a physician, or talk about dietary changes with their doctor.

Stephen Nicholls, M.D., the clinical director of the Cleveland Clinic Center for Cardiovascular Diagnostics and Prevention, says it's never too late to improve your health by eating better, becoming physically active, quitting smoking, and seeing a doctor for checkups.

However, Nicholls is still concerned that fat acceptance may send the message that being overweight isn't a health issue.

"As a population, we have moved the yardstick ourselves as what we consider to be a problem and what we don't consider to be a problem," Nicholls says. "We consume processed, high-fat, easily available food and reduce the amount of exercise and activity we perform on a daily basis. There is complacency about developing obesity, and it could suggest that we underestimate what its implications might be."

He adds, "Obesity is the single greatest public health problem we face in the U.S. today and is now spreading beyond the developed world into developing countries."