Wheelchair mobility at the tip of the tongue 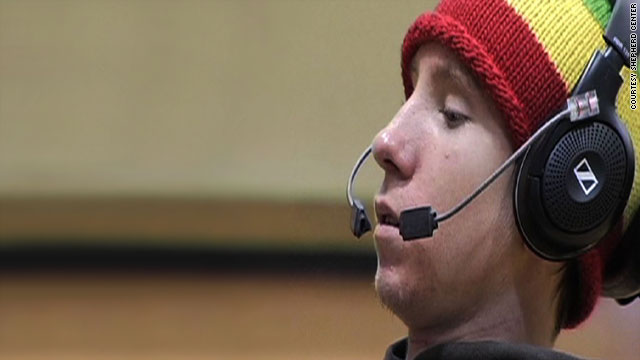 (CNN) -- Cruise Bogle, 18, was skimboarding with friends in Delray Beach, Florida, when he took a wave that whipped his board out from under him. Bogle was thrown backward, and his head hit the ocean floor. When friends saw him lying still in the surf, they knew something was wrong and rushed him to the hospital.

"I broke my C4 vertebra and was left paralyzed from the neck down," says Bogle of that fateful day in December 2008. "I then spent two weeks in the ICU at Delray Medical Center and was flown to Shepherd Center on New Year's Eve."

According to the American Academy of Physical Medicine and Rehabilitation, more than 11,000 Americans sustain spinal cord injuries each year. Although advances have been made in improving the quality of life for people such as Bogle, now a quadriplegic, innovators are always looking for something better.

Bogle became a part of this quest while at Shepherd Center in Atlanta, Georgia. It's one of the largest rehabilitation centers on the East Coast. Bogle was tapped to test drive a new piece of technology.

Shepherd joined forces with scientists from the School of Electrical and Computer Engineering at the Georgia Institute of Technology to try out a new wheelchair, powered not by a keyboard, buttons or a wand in the mouth, but by the patient's own tongue.

"One of the major advantages of the tongue is that it's directly connected to the brain," says Maysam Ghovanloo, assistant professor at Georgia Tech and head of the project. "The tongue is unlike the rest of the body, which is connected to the brain through the spinal cord. A patient who has even the highest level of spinal cord injury can still move his or her tongue like me or you."

Watch more on the tongue-controlled wheelchair

Video: Tongue-controlled wheelchair
One of the major advantages of the tongue is that it's directly connected to the brain.
--Maysam Ghovanloo, assistant professor at Georgia Tech
RELATED TOPICS

The first clinical trials of the Tongue Drive system, as it is called, tested the ability of individuals with high-level spinal cord injuries to navigate the wheelchair using only tongue movements.

"I was offered the position while at Shepherd Center," explains Bogle. "I think I was the twelfth person who participated."

For the trial, Bogle first trained with a computer to learn how to move his tongue to generate the different commands for his chair, such as forward, backward, right and left.

Once he mastered the commands, researchers fitted his tongue with a small magnet, no bigger than a piece of rice. The magnet works like a mouse pad, with the tongue as the cursor. Move the tongue forward and it sends a wireless signal to six sensors in a special headset that cause the wheelchair to move forward. Move the tongue back, and the chair goes into reverse.

Bogle was then run through some paces with his chair, navigating an obstacle course of cones. By touching the tongue to certain parts of his mouth, he was able to make the chair move without any bulky attachments.

Ghovanloo says the beauty of the chair goes beyond mobility.

"The users like it because they don't look much different when using the chair, as opposed to other mobile units that use sip and puff methods [like the one used by the late Christopher Reeve] or keypads to get around," explains Ghovanloo. "These patients, the last thing they want is to look even more different when in a wheelchair. This design helps."

Although trial participants were patients with spinal cord injuries, Ghovanloo and doctors from Shepherd say patients with other conditions could also use the tongue wheelchair.

"The technology is developed for all individuals who are suffering from a high level of disability," says Ghovanloo. "It could help people who suffer from different types of strokes, as well as those who have ALS, [amyotrophic lateral sclerosis or Lou Gehrig's Disease], which can paralyze the patient."

Other researchers are working on mouth-manipulation techniques to control wheelchairs, but Georgia Tech is the only group focusing on the tongue.

Since the clinical trials, Tech researchers have been looking for ways to improve the equipment, in the hopes of making it even smaller. While the original trial only worked with six commands, the Tongue Drive system in development now has the ability to capture a much larger number of tongue movements, each representing a different command.

For Bogle, now 20 and attending college in Florida, he believes good things will come from his participation in the trial.

"The wheelchair was pretty crazy," he says. "It was awkward at first to control a wheelchair with my tongue, but it got easier as I went on." And he adds enthusiastically, "It is amazing technology, and I can't imagine what else Georgia Tech will turn out in the coming years."