(CNN) -- The medical journal The Lancet on Tuesday retracted a controversial 1998 paper that linked the measles, mumps and rubella (MMR) vaccine to autism.

The study subsequently had been discredited, and last week, the lead author, Dr. Andrew Wakefield, was found to have acted unethically in conducting the research.

The General Medical Council, which oversees doctors in Britain, said that "there was a biased selection of patients in The Lancet paper" and that his "conduct in this regard was dishonest and irresponsible."

The panel found that Wakefield subjected some children in the study to various invasive medical procedures such as colonoscopies and MRI scans. He also paid children at his son's birthday party to have blood drawn for research purposes, an act that "showed a callous disregard" for the "distress and pain" of the children, the panel said.

After the council's findings last week, The Lancet retracted the study and released this statement.

"It has become clear that several elements of the 1998 paper by Wakefield et al. are incorrect, contrary to the findings of an earlier investigation. In particular, the claims in the original paper that children were 'consecutively referred' and that investigations were 'approved' by the local ethics committee have been proven to be false. Therefore we fully retract this paper from the published record."

Has autism touched your life? Share your stories, thoughts on vaccination study

"It's the most appalling catalog and litany of some the most terrible behavior in any research and is therefore very clear that it has to be retracted," he said.

CNN was unable to speak to Wakefield, but in a statement he denied wrongdoing.

"The allegations against me and against my colleagues are both unfounded and unjust and I invite anyone to examine the contents of these proceedings and come to their own conclusion. In fact, the Lancet paper does not claim to confirm a link between the MMR vaccine and autism. Research into that possible connection is still going on."

The Centers for Disease Control and Prevention praised The Lancet's retraction, saying, "It builds on the overwhelming body of research by the world's leading scientists that concludes there is no link between MMR vaccine and autism. We want to remind parents that vaccines are very safe and effective and they save lives. Parents who have questions about the safety of vaccines should talk to their pediatrician or their child's health care provider."

Since its publication, Wakefield's study has attracted many critics who argued that the work had been so flawed, it should not be regarded as scientific.

Wakefield theorized that the measles vaccine caused gastrointestinal problems and that those GI problems led to autism. In his view, the virus used in the vaccine grew in the intestinal tract, leading the bowel to become porous because of inflammation. Then material seeped from the bowel into the blood, Wakefield's theory said, affecting the nervous system and causing autism.

But subsequent research has been unable to duplicate Wakefield's findings. 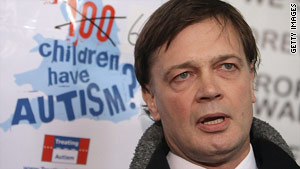 A September 2008 study replicated key parts of Wakefield's original paper and found no evidence that the vaccine had a connection to either autism or GI disorders. The study, conducted at Columbia University, Massachusetts General Hospital and the CDC, also found no relationship between the timing of the vaccine and children getting GI disorders or autism.

The Wakefield study has been a key piece of evidence cited by many parents who do not vaccinate their children because of autism fears.

"The story became credible because it was published in The Lancet," Alison Singer, president of the Autism Science Foundation, said Tuesday. "It was in The Lancet, and we really rely on these medical journals."

Singer, the mother of a child with autism, added, "That study did a lot of harm. People became afraid of vaccinations. This is the Wakefield legacy: this unscientifically grounded fear of vaccinations that result in children dying from vaccine-preventable diseases."

Retractions are rare in medical journals and usually occur as a result of fraud or plagiarism, said Marcia Angell, a former editor of The New England Journal of Medicine.

"It is a major event when there is a retraction like this," she said. "It sounds like there was a misleading design of the study ... patients not randomly chosen. There were ethical violations."

Schaffner added, "This series of events is damning and should refocus all of us in the field to find better methods of diagnosis and treatments."

The Lancet came under criticism for the initial publication of the paper 12 years ago.

"The mere publishing of this paper created something that will never fully go way: the false notion that MMR caused autism," said Dr. Paul Offit, author of "Autism's False Prophets: Bad Science, Risky Medicine, and the Search for a Cure," and the chief of division of infectious diseases at the Children's Hospital of Philadelphia.

The retraction did little to change the opinion of Rebecca Estepp, a spokeswoman for Talk About Curing Autism.

Estepp said her son has autism and bowel problems. She said she remains convinced that he had a vaccine reaction and that Wakefield's research helped doctors identify how to help her son.

"I guess the GMC can say whatever they want to say for the rest of their existence, but I know that my son got better because of Dr. Wakefield," she said.

Generation Rescue, an advocacy and support group founded by actress Jenny McCarthy, whose son has autism, expressed support for Wakefield. A co-founder of the group, JB Handley, called him "a courageous honest doctor who told an inconvenient truth." McCarthy is a high-profile proponent of the belief that childhood vaccinations may play a part in the condition.

Generation Rescue criticized the General Medical Council's judgment on Wakefield with this statement: "The sole purpose of the GMC's ruling this week is to try and quell the growing concern of parents that the expanding vaccine schedule and the remarkable rise in autism are correlated."

It also advised parents to do their own research before deciding to give their child the MMR vaccine.

Cases in which U.S. families have sued alleging a vaccine-autism link have had mixed outcomes.

In 2007, a U.S. federal program intended to compensate victims of injuries caused by vaccines concluded that a 9-year-old girl's underlying illness had predisposed her to symptoms of autism and was "significantly aggravated" by the vaccinations.

Two years later, three American families sought compensation from the Vaccine Injury Compensation Program, but the panel ruled that they had not presented sufficient evidence to prove that the vaccines caused autism in their children.