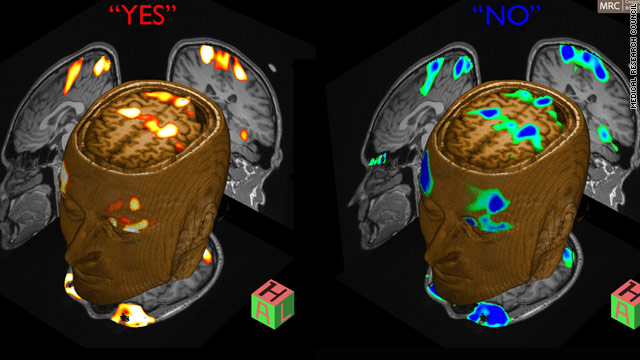 London, England (CNN) -- A man presumed to have been in a vegetative state for five years has communicated with the outside world for the first time since suffering severe head injuries in a car crash, researchers said Thursday.

The finding by British and Belgian researchers has huge implications for the care and treatment of patients in a coma-like state. It comes two months after a Belgian car crash victim whose condition was misdiagnosed as a vegetative state for 23 years was revealed to have been conscious the whole time.

Before the latest experiment the 29-year-old Belgian patient, who had his accident in 2003, had shown no sign of being aware of the outside world.

Five years ago doctors believed he slipped from a coma to a vegetative state, leaving his body functioning but without his personality or consciousness.

The researchers, based at Cambridge and Liege universities, realized that diagnosis was wrong when the man responded to questions about his life as scientists monitored activity in his brain.

Using a scanning technique called functional magnetic resonance imaging (fMRI), the patient's brain activity was mapped while he was asked to answer "yes" or "no" to questions such as "Is your father's name Thomas?"

The patient communicated answers by wilfully changing his brain activity.

In the three-year study, 23 patients believed to be in a vegetative state were scanned using fMRI, and signs of awareness were detected in four of these cases (17 per cent), the researchers said.

The fMRI method used can decipher the brain's answers to questions in healthy, non-vegetative, participants with 100 per cent accuracy, but it was never tried in a patient who cannot move or speak.

Dr. Adrian Owen, co-author of the research from the Medical Research Council, said: "We were astonished when we saw the results of the patient's scan and that he was able to correctly answer the questions that were asked by simply changing his thoughts.

"Not only did these scans tell us that the patient was not in a vegetative state but, more importantly, for the first time in five years, it provided the patient with a way of communicating his thoughts to the outside world."

Colleague Dr. Steven Laureys, from the University of Liege, said the scans had given the patient his only means of communication since the accident.

He added: "It's early days, but in the future we hope to develop this technique to allow some patients to express their feelings and thoughts, control their environment and increase their quality of life."

The cases of patients in vegetative states highlight the difficulty in determining levels of consciousness in people who cannot communicate. In the example of the Belgian patient in November who was misdiagnosed as being in a vegetative state, experts were skeptical about how a therapist expressed his thoughts by moving his fingers across a keyboard.

"That's Ouija board stuff," Art Caplan, a University of Pennsylvania bioethicist, told the Associated Press, according to Newsweek.