In sickness and in health ... couple's love endures 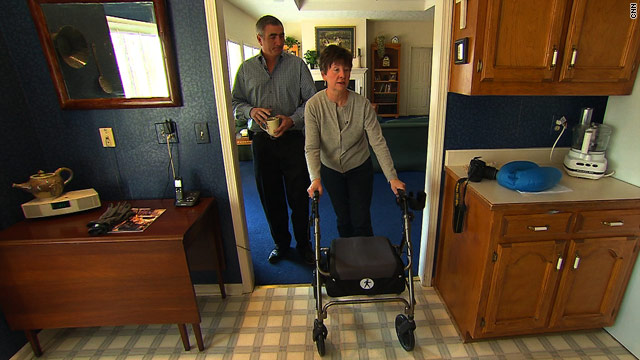 Vera Forkner learned she had multiple sclerosis nearly 12 years ago. Her husband Tom stands by her.
STORY HIGHLIGHTS

(CNN) -- Tom and Vera Forkner have loved each other for more than 30 years.

"As you can imagine, it's been everything," Vera said as Tom laughed.

"It's been up and down; it's been smooth; it's been rocky. We've been through a lot together," she said, smiling.

"The first thing was just fear, because we didn't know what was going on...fear, concern and worry for Vera," explained Tom.

Vera says it was like a death in the family. "It was like the death of a loved one. I'd get up every morning and the first thought was, I have MS," explained Vera.

For the first four or five years her disease was fairly stable and their lives seemed almost normal. Vera, who was in her early 40s, was taking a MS drug that kept her disease under control.

MS is a disease in which the body's immune system attacks the protective covering of the nerves of the brain and spinal cord. People generally have a normal life expectancy, but quality of life is affected. Some experience fatigue, problems walking, and slurred speech.

Vera began noticing a change in symptoms in her mid-40s.

"Things just started going downhill with my mobility and having more trouble. Having to use a cane and then going to a walker, a rollater (rolling walker) and now I use the power chair when I go out," she said.

And with her change in mobility has come a change in her relationship with Tom. They can't go exploring caves as they did when they were first married or head to the beach or the mountains at a moment's notice.

"We've had to cut back on a lot of that and figure out ways we could get along and other ways that we could have fun together and be together without focusing on what we couldn't do," said Vera.

They now work together to keep two businesses afloat and teach self-defense classes. For fun they go out to dinner or a movie or visit with their two sons who live nearby. But living with a lifelong illness can put stress on a marriage, explained neurologist Ben Thrower, medical director of the Multiple Sclerosis Institute at the Shepherd Center in Atlanta, Georgia.

"I think any chronic health problem, whether it's multiple sclerosis, maybe diabetes, cancer has the potential to affect the dynamics within a relationship," said Thrower.

Thrower shared a story about a young patient with mild MS who was abandoned by her husband. "His comment to her was that this is not what he signed on for when he married her, that his vision of their future did not include this health problem," said Thrower.

In fact a study published late last year in the journal Cancer found that though the rate of divorce was not higher among couples living with a chronic illness such as MS, women did not fare as well in marriage if they were the sick partner.

"About 90 percent of the divorces occurred when the woman was the affected partner," said study author Michael Glantz, a neuro-oncologist at Penn State University.

Glantz studied 515 couples in which one of the spouses had either cancer or MS. He found that in the case of MS the wife was six times more likely to be abandoned by her spouse if she was the sick partner, than if a man was the sick spouse.

We help each other and try to support each other the best way we can. I don't think love by itself conquers all.
--Tom Forkner
RELATED TOPICS

But psychologist John Conlee at the Huntsman Cancer Institute at the University of Utah said that all is not lost. He finds it's important for couples to reach out and seek help if they are struggling.

"It's vital that the couple work toward better communication and stay in there when it's difficult and work through issues rather than avoiding them," said Conlee.

That's good advice that Tom and Vera have put into practice for many years.

"We obviously love each other. We help each other and try to support each other the best way we can," said Tom. "I don't think love by itself conquers all."

"It takes more than that. It takes trust in God, commitment; it takes sometimes when you don't feel that love, just doing what you need to do and getting through it," Tom said.

Getting through hard times knowing that good times are never out of reach, Vera smiled when she talked about Tom's spontaneity and his gentle willingness to push her a little.

"He's always coming home going 'I think we should try this now; I think we should do that now.' And I'm thinking, I've never done that before.... But that's the way my life has been with him. It's an adventure all the time whether I'm in a power (wheel) chair or not," she said.