For Olympians and weekend warriors, winter sports can trigger asthma 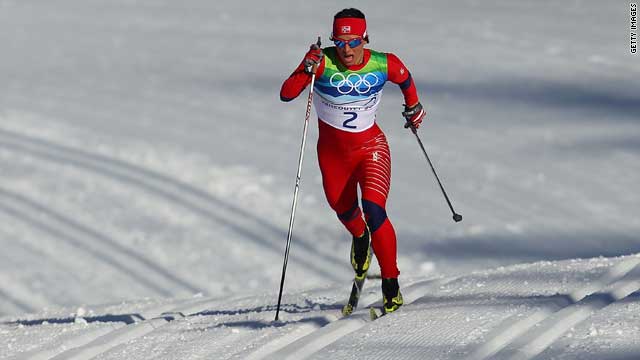 (Health.com) -- Do you cough, wheeze, or get short of breath when you exercise in cold weather? You could have asthma, but you've got plenty of company. Exercise-induced asthma is surprisingly common among people who work out in cold climates, whether they're jogging around the neighborhood or gunning for gold in Vancouver.

This week, for example, Norwegian cross-country skier Marit Bjørgen won the bronze medal in the women's 10-kilometer race, even though she uses asthma medication. In fact, half of cross-country skiers and one-quarter of aspiring winter Olympians in general have exercise-induced asthma, according to a 2000 study of 170 athletes conducted by the United States Olympic Committee.

"Any [exercise] outdoors on a mountaintop is a culprit, but just jogging in Central Park will do it as well," says Dr. Len Horovitz, a pulmonary specialist with Lenox Hill Hospital, in New York City. Exercise-induced asthma doesn't have to slow you down, however. With the right medications and precautions, exercise-induced asthma won't keep you from your daily workout, or even from competing at an elite level.

How cold and exercise cause asthma

Wheezing, chest tightness, and the other symptoms of exercise-induced asthma generally begin several minutes after you begin working out. For some people, the symptoms start soon after they finish exercising.

Although athletes who compete in warm-weather sports may suffer from exercise-induced asthma as well, mixing exercise and cold, dry air is especially problematic. For many people with regular asthma, in fact, just stepping outside in frigid temperatures is enough to cause symptoms.

"Both cold air and exercise in and of themselves can trigger asthma symptoms, but doing them together is more likely to trigger an exacerbation," says Dr. Thomas M. Leath, an assistant professor of pediatrics at Texas A&M Health Science Center College of Medicine.

When the air is dry -- as it often is in cold climates during the winter -- your lungs can become even more irritated, Horovitz adds. "The evaporative loss and cooling of the airways triggers the process of bronchial constriction," he says. "One sport you don't see exercise-induced asthma in so much is swimming. The humidity at water level is such that there isn't as much evaporation as in running or winter sports." (Chlorine, however, can trigger asthma symptoms, Horovitz notes.)

Health.com: Chlorine triggers my asthma, but I'm still a triathlete

The combination of cold air and exercise is "a double whammy," says Dr. Steve N. Georas, the director of pulmonary and critical care medicine and the director of the Mary Parkes Center for Asthma, Allergy and Pulmonary Care at the University of Rochester Medical Center, in New York.

The bronchospasms that characterize exercise-induced asthma refer to a contraction (or spasm) of lung airways. Experts aren't certain what's behind this phenomenon. One theory is that the increased blood flow caused by exertion forces the blood vessels in the airways to expand, leading to constriction of the airways, Georas says. Another theory holds that cold air activates certain inflammatory cells in the airways.

"Asthma [is] as an inflammatory disease where, for some reason, the body's immune response has sent out an alarm about something going wrong in the lungs," says Georas. "Once that alarm has been set off, there's airway inflammation."

How to fight it

The first-line treatment for exercise-induced asthma is a bronchodilator. Usually delivered via rescue inhalers, these drugs (such as albuterol) fight symptoms by relaxing the muscles that line the airways in the lungs.

The most commonly used bronchodilators, a class of drug known as beta2-agonists, are prohibited by the International Olympic Committee (IOC). Because beta2-agonists can promote muscle growth, athletes with asthma must prove they have the disorder and must receive permission to medicate themselves; otherwise, they run the risk of being disqualified from the Games. "The IOC has really cracked down on this," says Georas. "A few years ago, a lot of people declared themselves asthmatic, which was thought to be a way to get inhaled steroids."

If you experience asthma symptoms every time you exercise in cold weather, you may want to use a bronchodilator 10 to 15 minutes before exercising to prevent an attack, Horovitz recommends.

If your asthma isn't predictable, keep an inhaler handy while you exercise instead of using it beforehand. "There are patients in whom it's intermittent. Sometimes they can exercise, sometimes they can't," says Georas. "If you feel chest tightness coming on, have your inhaler on you."

In addition to medication, there are other precautions athletes can take. Warming up for a few minutes before hitting full exercise mode, breathing through your nose (to warm and humidify the air before it hits your airways), and wearing a scarf or face mask around your mouth can all prevent symptoms, says Leath. Masks that contain inserts known as heat exchangers have also been shown to fight exercise-induced asthma in cold weather.

These treatments are effective enough that exercise-induced asthma rarely keeps people from the winter sports they enjoy. Leath has heard many patients complain of cold air making their asthma worse, but he hasn't seen any asthma exacerbations so severe that they prevent winter activity.

"The whole goal of asthma therapy with each patient is to allow them to conduct their daily activities unfettered," says Georas.