How much should you exercise? 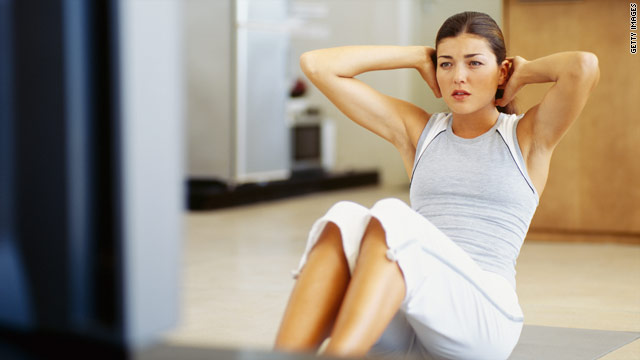 Recent exercise findings have confused some people on whether they need to work out harder for a shorter amount of time or moderately for a longer period of time.
STORY HIGHLIGHTS

(CNN) -- The headlines sounded promising -- 20 minutes of interval exercise can provide the same benefits as many hours of conventional workouts. But soon after came another study, this one suggesting that women should work out an hour every day just to maintain their weight.

"It does get confusing," Janice Bissex, mother of two and regular exerciser, said after the studies were released in the past two weeks.

The contradictory information can be disconcerting, said Stephen Ball, associate professor of nutrition and exercise physiology at the University of Missouri. "It makes it look bad -- like physical activity scientists, we're changing what we're saying all the time. We're really not."

Exercise experts say the most important message is to be active, regardless of the latest studies. How much one should exercise depends on personal fitness goals, they said.

But experts recommend that an average person stick to existing public health guidelines, which recommend that children and teenagers exercise one hour every day and adults get a weekly minimum of two hours and 30 minutes of moderate intensity physical activity (such as brisk walking, dancing, gardening) or one hour and 15 minutes of vigorous activity (jogging, aerobic dancing and jumping rope).

A study published in the March edition of the Journal of Physiology found that short periods of high-interval training was just as effective as long durations of endurance training, based on the results from seven young, healthy men.

Researchers from McMaster University in Ontario, Canada, had the seven subjects pedal for one minute on a stationary bike at the highest intensity they could muster.

This one-minute burst was followed by about a minute of rest, another minute of intense exercise, and so on, until participants reached 20 minutes total -- 10 exercising, 10 resting.

The study suggested that quick, high-interval training "may represent an alternative to endurance training to improve metabolic health and reduce the risk for chronic diseases."

But, interval training isn't easy. It cuts down on time, but many people find the intense bursts of vigorous exercise difficult.

"It's uncomfortable exercise. It's high intensity, so it hurts," said Martin Gibala, lead author of the study.

While interval training might be attractive for athletes or time-crunched, twentysomethings who already work out, it may be daunting for others.

"It's tough to get people [in their 50s] to do moderate exercises," Ball said. "For intense exercises, it hurts. People don't like to do it."

Gibala, chair of the kinesiology department at McMaster, said the results of his research are not intended to replace existing guidelines.

"We're certainly not suggesting this is the optimal approach to fitness," he said. "Public health guidelines are based on very good science, so the recommendations are very sound. But we also know the number one barrier for exercise is the lack of time. It's incumbent on scientists to look at other potential ways that we can get many of the same benefits in a time-efficient manner."

Another research getting attention was a March article in the Journal of the American Medical Association that found that women who exercised an hour every day were better able to stave off weight gain.

Researchers at Brigham and Women's Hospital and Harvard Medical School studied 34,000 women, with the average age of 54.

Over a 13-year period, the women gained an average of 5.7 pounds. The women who successfully maintained their weight (13 percent) exercised an hour a day at moderate intensity.

"To say that most women need an hour a day, it puts it into the category of an unattainable goal," said Bissex, a working mother and a dietitian in Melrose, Massachusetts. "That's frustrating. Getting that hour of exercise, while being a successful career woman, while taking care of kids, a partner or spouse, and parents, we're going to all end up getting two hours of sleep."

That reaction is fairly common.

"When I see studies that say one hour of exercise a day, people freak out and say, 'I don't have that kind of time,' " Pete McCall, an exercise physiologist at the American Council on Exercise.

"We can argue about vigorous, moderate intensity and time. The fact is if you don't do anything, you're going to significantly increase risks for disease and other things that can take years off your life."

How much should a person exercise?

When looking for basic guidelines, exercise specialists recommend the 2008 Physical Activity Guidelines for Americans, issued by the U.S. Department of Health and Human Services. A committee of doctors and scientists reviewed the scientific literature to develop the recommendations.

The amount of time a person should exercise depends on his or her fitness goals, whether it's for weight loss, health maintenance or performance training. And that person also needs to fit diet and nutrition into the equation.

"If you take in lots of calories, it doesn't matter how much you exercise," Ball said. "It takes a lot of exercise if you don't watch what you eat."