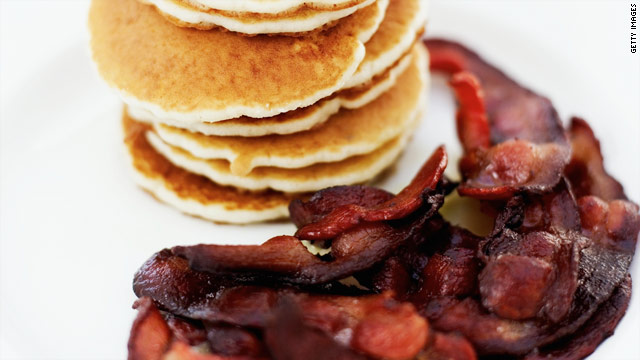 Using a book about binge eating combined with sessions with a health educator was called effective in stopping the behavior.
STORY HIGHLIGHTS
RELATED TOPICS

(CNN) -- Help to control binge eating could be as simple as a self-help book and check-ins with a health educator, according to new research out this month.

Binge eating is the most common eating disorder in the United States and remains a difficult condition to identify and treat.

Many patients who suffer from the disorder believe they are overeating and seek weight-loss treatment rather than mental health help, experts said. Even when they receive a proper diagnosis, the treatments for binge eating are expensive, time-consuming and sometimes difficult to obtain, according to eating disorder experts.

Researchers at Kaiser Permanente Center for Health Research examined whether a self-guided program would help 123 study participants. They were mostly women with an average age of 37, who binged at least once a week.

Half the participants were assigned to treatment as usual. They received notifications about available nutritional services, medical treatments, healthy eating and weight management programs.

The other half were assigned to a self-guided program for 12 weeks detailed in a book called "Overcoming Binge Eating" (its author has no affiliation with any of the researchers) and met individually with a health educator for eight sessions. Under the program, binge eaters kept food diaries and wrote what triggered their behaviors.

"The health educator is there as a coach to support their learnings through the book," said study co-author Lynn DeBar, a clinical psychologist at the Kaiser Permanente Center for Health Research.

These findings are published in the April issue of the Journal of Consulting and Clinical Psychology.

"The feedback we got back from people suggests some of the things that seemed simplest made the biggest difference," DeBar said. "Those who binge eat go for long periods without eating, and one of the primary things we encourage people to do is eat regularly, to eat breakfast and not go too long between eating."

A year later, 63 percent of the study group stopped binge eating, compared with 28 percent in the control group. Those results suggested a simple and low-cost intervention could be effective, authors said.

Binge eaters lose control and consume significant quantities of food at once. It would generally be equivalent to "two sizable meals," DeBar said.

"If someone goes to a fast-food restaurant and orders two super combo meals -- that would be a binge. What differentiates it from overeating is not only the amount of food, but they feel they can't stop. And it happens once a week for over three months -- often more frequently than that."

The disorder could be added as a psychiatric condition in the next edition of the Diagnostic and Statistical Manual of Mental Disorders. It is included provisionally in the current edition.

The latter focuses on the premise that difficult relationships cause negative moods, so people "are using food to soothe how they're feeling," said Marian Tanofsky-Kraff, an assistant professor of medical and clinical psychology at the Uniformed Services University of the Health Sciences who researches binge eating. It also explores the root of problems that turn people to food.

While these methods are effective, they're not widely available, because it requires highly specialized therapists.

Using a self-guided book could reach more patients who can adopt the steps and "rely on themselves and can continue to do these things when they're not under a health coach or therapist," DeBar said.